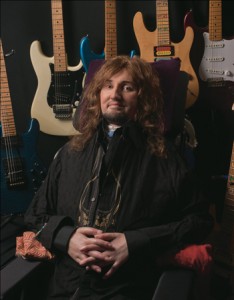 Jason Becker took the guitar world by storm in the mid 1980’s with the guitar duo Cacophony which along with Becker featured future Megadeth guitarist Marty Friedman. Also during this time Jason released his first solo album titled “Perpetual Burn”. Cacophony disbanded in 1989 with Jason going on to join David Lee Roth’s band for the album “A Little Ain’t Enough”. Sadly Jason’s success was greatly impacted when at age 20 he was diagnosed with ALS and given only 3 to 5 years to live. Today at age 45, Jason has beaten the odds and is showing no signs of slowing down. Media Mikes had the great pleasure of speaking with Jason recently about some of his recent work, several new signature products and his recent collaboration with Guitar Player Magazine.

Adam Lawton: Aside from your 2012 documentary what do you think has made people stand up
and take notice of your career and talent over the last few years?
Jason Becker: Well, I would like to think it is my music. I think that is partly true. A whole new generation is getting into my stuff, both the old guitar music and the new compositional music. I also think that it has to do with the fact that I have had ALS for so long, which is a tough thing to ignore. Guitar Player Magazine putting me on the cover helped a lot as did having many well known guitarists playing on my tunes. The Not Dead Yet concert’s played a big role as well. I am really active on Social media as I run my Facebook pages. This is something that is really cool and it’s nice to be able post personal things. John Mayer responding to my Ice Bucket Challenge with his own video talking about me, playing over one of my songs, and asking people to donate to my trust, didn’t hurt either!

AL: You recently have had both a signature/tribute guitar and a signature pickup come out. What has that experience been like and how did those partnerships come about?
JB: My friends at Carvin, Richard Cruz and Albert Comas, saw the documentary and got us back together to make my old famous blue guitar available to fans. Both myself and Carvin had been getting a lot of people asking if that guitar was something that could happen. It is so well made, and it sold so well, that they decided to make my numbered guitar available too, which is selling incredibly well. Jeff Kiesel and I are working on a few more design ideas now, which is a total blast! It also helps my family and me out financially in a big way. As for the pickup back when I was with David Lee Roth, Seymour Duncan and I were working on a signature pickup together. My ALS started getting bad and affecting my voice, so we stopped working on it. Recently I was trying out a perspective signature amp with my friend Michael Lee Firkins. He kept trying different guitars, and the best sounding one had the test Duncan in it. I contacted Duncan and they wanted to make a signature Becker pickup. We spent months testing many different pickups with Firkins and my buddy Chris Barnett, until we got it exactly how I wanted it.

AL: Being that you are physically unable to play how involved were you with the creation/testing of these products?
JB: With the guitar, Carvin had made my first blue guitar, so they just copied the specs. The original had a Kahler bridge, but I prefer the Floyd, so we went with that. For the numbered guitar, Carvin took my original Peavey for a year, so they could pretty much copy it. Michael Lee Firkins always helps me when I need fingers and another set of ears. He also did that on my song “End of the Beginning.”

AL: Can you tell us about the column you have recently started writing for Guitar Player?
JB: It is about creativity. People often ask me how I come up with unusual ideas or melodies. This column attempts to tell how some of my ideas come to me, and the stories behind them. The first column talks about non-musical inspirations. The next two talk about my time with Marty Friedman, and some of the things we did to open our minds and think differently. My dear friend at Guitar Player, Matt Blackett, helps me remember those times.

AL: You have a very unique way of creating music. How has that system 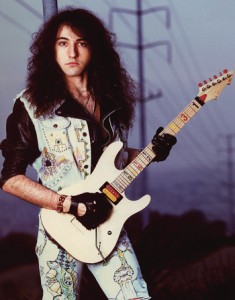 developed from when you first started using it to now?
JB: When I first started using the computer to compose music, I could still use my right hand a little, so I used a synthesizer. Once I lost my arm movement, my dear friend Mike Bemesderfer set me up with a headset that I could control with little head movements. That was cool, but my neck was weak, so I couldn’t do it for long. I only wrote one piece using that method – “Electric Prayer for Peace” from my Collection CD. Now I can’t move my head, so I just use the communication system that my dad invented, to instruct my caregivers what to put into the music software program called Logic Pro. I can then dick with every aspect of each note until they have feeling. I layer tracks and instruments in this way, then bring my friend/producer, Dan Alvarez over to give his input, and play the keyboard parts. Then if necessary, we record live musicians.

AL: Are you currently working on any new solo material and are there any plans to make a follow up to “Not Dead Yet”?
JB: I am working on a new album, which will have new pieces, some old guitar stuff, and many special guests. That’s something I am going to do with a Crowd Funder campaign. There are no plans to do another documentary, although the Japanese equivalent to HBO did a documentary last November about the making of my new album. It was really cool and people will want to check it out if they get the chance.