Slow West held its New York premiere on April 19th at the SVA Theater during the 14th annual Tribeca Film Festival. Writer and director John Maclean joined stars Kodi Smit-McPhee and Ben Mendelsohn in speaking with me about the Michael-Fassbender-lead western on the red carpet.

Ben Mendelsohn is a renowned Australian actor who in Slow West takes on the larger-than-life role of Payne. Payne, in his oversized furry coat, is the leader of a vicious gang that Fassbender’s character Silas used to run with, and like his character, Mendelsohn seemed a bit bitter at the abandonedment of his gang-mate…

Lauren Damon: Can you discuss the relationship of Silas and Payne
Ben Mendelsohn: Okay, so Silas and Payne rode together back in the day and Silas essentially decided he was gonna go his own way–you know, he’d had enough, like ‘Yeah yeah, I’ve got what I wanted, I’m off doing my own thing’ Which, when you think about it is sort of a really punk move, you know? Because essentially Payne you know, gave this guy A LOT. Now, I’m not saying Silas isn’t a talented man, he is. But basically, he packed up and he got his tail between his legs and off he ran. And you know, time’s come now where our paths  have crossed again and [Silas]’s got this fine little bounty he’s traveling around with and really I just wanna know what’s up with 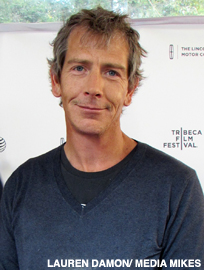 LD: And how did you all develop the look of Payne?
Ben: Oh the coat is genius. The very talented wardrobe lady [Kirsty Cameron] had it made and showed me all the pictures of trappers and what not from that period with these massive coats on. So once you put that coat on and that hat and you’ve got the tattoos, the rest of it’s a cake walk.

LD: How was it to shoot in NZ and with that wardrobe?
Ben: It was…yeah, it’s really crazy open wide spaces. It’s very desolate, it’s harsh. It’s a harsh sort of enviroment but very beautiful too. New Zealand’s a great place to shoot, it’s really got an extraordinary array of you know, locations and looks and feels…it’s all there. It’s a beautiful place to shoot.

LD: What attracted you to the film? I mean for a western it had a sense of humor about it too that I didn’t expect at all.
Ben: Yeah, I wasn’t sure how that would go. Michael Fassbender had started with John Maclean and they’d done a couple of short films and essentially the fact that you know that Michael Fassbender had sort of backed this to the degree he did was a very good sign. I’d seen his short films that John Maclean had done and they had something. You know, you could feel there was something there, western, it felt pretty cool. It felt like a good bit of fun with a decent chance of it working.

Director John Maclean had previously worked with Michael Fassbender on the short film Pitch Black Heist, which was shown at the 2012 Tribeca Film Fest. 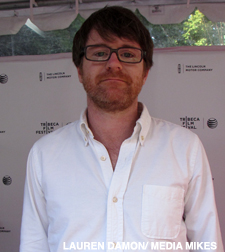 LD: Can you talk about how you initially came to work with Michael Fassbender, what drew you to him or him to your work?
John Maclean: I think it was around the time that he was shooting with Tarantino [on Inglourious Basterds], I knew his agent. And his agent had given Michael some of my early short films I was making on my own. Michael saw something in them, came to me and said you know, if you want to do something, I’ll give up a day. So we started working together there.

LD: And when you approached this script, there’s a lot of dark humor in it—did you primarily come at it as a comedy or a western first?
John: I think, like my favorite films—I mean you look at a film like Fargo and it’s not a comedy, it’s not a thriller—I think some of the films I’m interested in, I think you just have to try and be truthful. And like life, comedy comes in to sad moments and sadness comes in to comedy moments.

LD: And it’s unconventional that your young romantic lead, his love interest doesn’t actually like him like that back!
John: I think “spoilers” here!

LD: I know, I’m sorry, my review says he’s been friend zoned
John: I just I mean, maybe that was from personal experience (laughs) when I was younger. But that’s what happens with young boys, I think. I guess it was for personal experience actually but um, I think he was never right for her. I think she was always more practical and he always too much of a dreamer. So from the beginning, I guess it’s doomed.

LD: How do you describe the back story between Payne and Silas?
John: Yeah, I think that’s the hard thing with wanting to make a shorter film—you can’t branch out into too many of the backstories but…I just imagined that the wild west, there wasn’t that many people at that time. So people sort of crossed paths much more often than you’d expect. I imagine they travelled together and [Silas] was part of Payne’s gang and then didn’t like the senselessness of some of the violence and left and went to go alone and Payne’s trying to draw him back into it.

Kodi Smit-McPhee was recently cast as Nightcrawler in next year’s X-men: Apocalypse, seeing as his previous film co-starred Nicholas Hoult (“Beast”) and this one he shared the screen with Fassbender (“Magneto”) I had to ask about joining them as mutants.

Lauren Damon: Have you contacted your past coworkers here for advice on joining the X-Men? 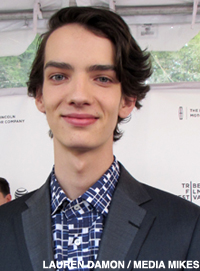 Kodi Smit McPhee: I haven’t contacted them yet. So we got Nicholas Hoult, Ty Sheridan and Michael Fassbender whom I know well. And I really can’t wait to get on set and work with them. And I haven’t said a word to them.

LD: What’re you most looking forward to about playing Nightcrawler?
Kodi: I really love the warmth that comes with the passion behind his character. And the novelty within just the tradition of him. I don’t necessarily have a desire to bring new things to it, but just show the world that they love.

LD: And are you familiar with Alan Cumming’s take on it from X2?
Kodi: Yes, absolutely. Usually, I mean if I don’t need to–like for Let Me In, I didn’t look at Let the Right One In–but for something like this, I thought it  was right to just find all the roots, you know, see how Nightcrawler evolved into who he is now.

LD: If you could choose your own X-power what would it be?
Kodi: I would love to physically, and within my own body, be able to travel back and forth and time. See how the history and the future plays out.

LD: Back onto Slow West, I was rewatching The Road recently and I saw your character there sort of as the young optimist to an older guide, like Jay in this film, did you feel that connection there?
Kodi: Absolutely and maybe in fact this whole story itself and the concept of a western story, it was very much like that. Like desolate and moving towards something hopeful. So yeah I really loved that idea and that was never intentional, but I guess it’s something that I’m just great at expressing and hopefully with Nightcrawler, I can move onto other things.

Next week: A more in-depth discussion with John and Kodi, meanwhile, you can check out my review of Slow West here.