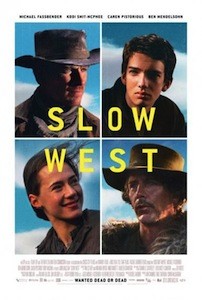 There’s a surprising streak of gallows humor coursing through Slow West, available now on DirecTV and having its NY premiere at Tribeca this week. The terrain is merciless and bloody but plenty meet their doom with a darkly ironic twist. Coupled with stunning visuals and a plethora of perfectly cast outlaws, John Maclean’s tale of star crossed lovers in the old west is an unexpectedly quirky entry into the genre.

We meet Jay Cavendish (Kodi Smit-McPhee), an upper class young Scotsman riding through the deep Colorado woods on a mission to find his lost love, Rose (Caren Pistorious). Jay is way out of his depths, bearing with him too much luggage and the old west equivalent of a Frommer’s guide. He narrowly avoids being shot when a lone bounty hunter named Silas intervenes on his behalf. “You need chaperoning,” the rugged Silas says, “and I’m a chaperone.” Naturally Silas has his own agenda regarding Rose, but Jay pegs Silas as a lonely man in need of company and accepts his help.

Naïve Jay is an interesting romantic lead insofar as his flashbacks to his time with Rose in Scotland reveal him to have been ye olde friend-zoned. It puts a nice tragicomic edge on his mission and earnest dealings with Silas. It’s also entertaining to watch the wide-eyed McPhee wear down the gruff Fassbender. The addition of Silas to Jay’s mission comes with its own baggage in the form of Ben Mendelsohn’s Payne. Payne, in an outrageous large furry coat, leads Silas’s old gang each of them looking every inch the old-timey outlaw. They bring with them absinthe and their own absurd tales from the road where Maclean is not afraid to cull some laughs from deadly stories even as Payne’s gang looms ominously over our leads.

Ultimately of course finding Rose is going to come down to a good old fashion shoot out as the west demands. Like the rest of the film, its gorgeously shot (New Zealand subbing for Colorado) and gives all the players a chance to shine before the bullets begin to really fly. It’s a satisfying climax to top off this brief offbeat journey through the west.