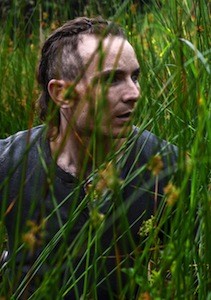 There is an admirable practicality at the heart of Stephen Fingleton’s post-apocalyptic film, The Survivalist. With small cast, no musical score and only a patch of woodland as a setting, Fingleton delivers a no-nonsense drama as lean as its protagonist.

For better or worse, Fingleton wastes no time with exposition as to what has happened to humanity. He opts instead to show a simple line graph charting the descent of human population. It is with only this information we are introduced to Martin McCann’s unnamed Survivalist. He lives a solitary existence on a makeshift farm in the Irish woods. His daily routine is not glamorous, more than once he uses his own bodily fluids to fertilize his crops, but it is successful. For one at least.

The Survivalist’s way of life is disrupted by the appeared if the elderly Kathryn (Olwen Fouéré) and her daughter Milja (Mia Goth). When the women’s initial attempts at trading the man no-longer-valuables in exchange for some food, he reluctantly lets them in. There Milja very matter-of-factly offers her body instead. All the while, the Survivalist keeps them at gunpoint.

No matter how comfortable the three get around each other, the threat of running out of supplies hangs over them all and this is where Fingleton wrings out the most dramatic tension. While Kathryn chastises Milja for becoming sentimental about the man, Milja is gradually realizing her mother might not be the optimal partner for survival. What’s great about the situation Fingleton has set up is it doesn’t take sides. Milja has just as much right to decide who her safest life raft is as the survivalist does carrying two shot gun shells on his person at all times.

In the title role, McCann brings to mind alternately a deer in headlights and a predatory bird. He is captivating to watch and a good anchor to this taut thriller.