Stephen Fingleton’s post apocalypse drama, The Survivalist held its NY premiere at the Tribeca Film Fest on Thursday April 16th with the stars and director in attendance. Martin McCann takes center stage in the film as the survivalist who has a small farm in the woods and a strict solitary routine to keep himself alive. 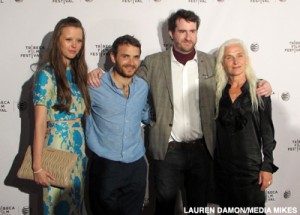 Lauren Damon: Was it daunting for you to receive a script where your character spends so much time in silence?
Martin McCann: No no, I just think when you’ve got a silent script, you’ve got more of an opportunity to appear a better than you actually are. Because most actors mess things up when they’ve got lines! [laughs]

The Survivalist’s routine is broken by the appearance of mother-daughter travellers, Milja and Kathryn, played by Olwen Fouere and Mia Goth.

LD: Did you two have a backstory worked out for this pair of characters?
Mia Goth: Well you know, you never actually find that out in the movie either so you sort of, you know–which was a lot of fun–you get to create your own idea of what that character was and who she was as we lead up to where we meet her in our story. And I think I kind of just got the sense that she was just a normal girl, an ordinary girl, thrown into like extraordinary circumstances. And she, I don’t know, just shows great bravery and resiiliance and that was one of the things that I found most compelling and [made] me wanting to be involved in this. I thought it was very empowering.
Olwen Fouere: We sort of did, yeah. We sort of did together and seperately. You know, I think 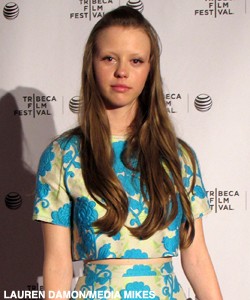 what I thought was important was that we would each have a very strong internal life. So we would have individually worked towards that…And I think that it was also important that there was sort of a distance between the two of them as well, you know, because one of the points of the film is how it overthrows societal norms and the whole idea of family values, which of course is a whole idea that’s falling apart now anyway.

LD: The Survivalist adds to a long string of recent bleak post-apocalyptic views of the future on film, what do you think the appeal of that genre is?
McCann: Sometimes the truth hurts. And even though it’s a science fiction idea, you know post-apocalyptic and in the future, the inevitability of the life we’re living is that resources will run out. So I think there’s a weird sort of effect that that has.
Fouere: Well I think perhaps the world is starting to question the fact that with the explosive of our population, of the human race, and that the human race is becoming the greatest virus on the face of the Earth. So I think maybe people are beginning to realize that and you know, I think that’s what happens at a critical time is people start to envision what might happen. What the future might hold and how you might address things.

You can read my review of The Survivalist here.