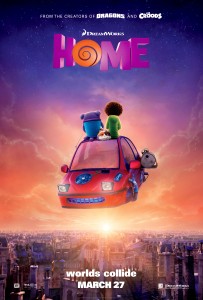 “Every once and a while…we knock it out of the park!” That should be Dreamworks Animation’s motto. “Home” will be their 31st movie, and since 1998, the studio hasn’t had as many home runs as Pixar and they only have two Oscars for Best Animated Feature. They won one for Best Original Song, but I’m sure no one at the office is hanging their hat on that one. “Home” is another adequate entry into Dreamworks Animation’s young history, but nothing to rave about.

“Home” is an adaptation of the book that I’ve never heard of, “The True Meaning of Smekday”. The movie revolves around the alien species, the Boov, but more specifically Oh (Parsons). He’s oblivious to his friendlessness and a general nuisance to the other Boov around him. His speech pattern is that of a Kindergartener learning proper English and his best qualities are made up of Olaf from “Frozen” and his worst qualities border on Jar-Jar Binks from an unmentionable prequel.

The Boov are a species that are constantly on the run, fearing the wrath of another alien race by the name of Gorg. Their tactic for avoiding destruction by the angry Gorg involves inhabiting Earth and forcibly abducting and relocating every human being on the planet to Australia; forcing them to live in gated communities (I’m sure the pitfalls of this plan are highly entertaining). Through a series of events, Oh accidentally alerts the Gorg to the Boov’s presence on Earth and becomes a fugitive of his own species. He runs into Tip (Rihanna), who has managed to avoid capture and is hiding out in her empty home, eating cans of pasta. This sets off a slightly amusing roadtrip/chase with a preteen and clueless space creature.

“Home” is obviously setting its sights on the children in the audience, with very few inside jokes for adults; although most will enjoy the comical voice stylings of Steve Martin as the leader of the Boov, Smek. You might wince at seeing Rihanna’s name, considering her persona in the entertainment industry and how she’s portrayed in the media. You also might be scratching your head at that acting choice considering her previous credits are “Battleship” and “This is the End”. She doesn’t quite carry the same silliness that Martin and Parsons bring to their character, but she has a believable tween voice. Her voice always sounds playful and youthful, and it’s actually a creditable dose of voice work on her part.

Halfway through I noticed that Rihanna’s contract must have stipulated that the entire soundtrack must be crafted by her since she’s seemingly on every song. It’s hard to pack an emotional punch when a movie’s soundtrack consists of “As Real As You and Me” and “Drop That”. It’s almost like creators of some of these movies are worried they won’t speak to an eight-year-old if they don’t throw in some contemporary hip-hop dance tracks.

“Home” is still an enjoyable time. Some moments move at blistering speeds, with aliens zipping to and fro with visual jokes and audible humor firing off left and right. When it has to rely on our two lone heroes with nothing, but themselves in a car, it struggles. Maybe Dreamworks should start cherry picking what they want to do next, or at the very least, put more effort into their promising projects. “Home” has the pieces for something remarkable, but none of the heart to stay with us.