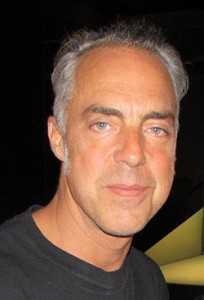 Titus Welliver has appeared in numerous film and television series including “The Town”, “Sons of Anarchy” and “Transformers: Age of Extinction”. Titus’s latest role is that of Harry Bosch in Amazon.com’s first original drama “Bosch”.  Taken from the pages of Michael Connelly’s book series “Bosch” looks to be a break out hit for the websites first on screen venture. Media Mikes spoke with Titus recently about his role in the series and what it’s been like working with Amazon to make “Bosch” stand out above the rest.

Adam Lawton: What can you tell us about the new series and your character Harry Bosch?
Titus Welliver: Harry is a LAPD homicide detective who we meet at a difficult point in his career. Right off the bat we meet him while he is in the middle of a civil suit for shooting a serial killer. While this is going on he gets called to a scene where the remains of a young child have been found. Upon viewers first meeting Harry they will see that he certainly has a lot on his plate.

AL: What was it that sparked your interest about the project?
TW: In the past I have played my share of cops in both film and television. What really drew me to the character was that he is not a cookie cutter or contrived type of character. All too often these characters are written as overly heroic and hard as nails. What’s interesting about the Harry Bosch character is that he is a very human character. He is flawed and vulnerable yet very driven with a strong moral compass. He’s not a political animal as he is very much an advocate for the victims. Harry wants justice for people which makes him a very myopic character. I find a number of different aspects of the character quite intriguing.

AL: Going in to the project were you familiar with the book series?
TW: I had read one of the books many years ago. It certainly stuck with me as 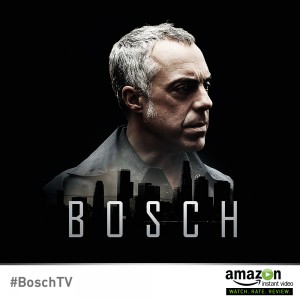 easily remembered the character. I have friends who are big fans of the series as well. When I was cast in the role the first thing I really had to do was dive in to the role. I was working on “Transformers 4” at the same time so there wasn’t a lot of prep time. I read “City of Bones” and “The Concrete” blond which are the two books the pilot episode sort of are focused around. I have the other books as well so when I have some free time I work on those. There are a lot of nuances in the books that I have been able to pull out and use in my portrayal of the character.

AL: Were you given specific guidelines for the character or were you free to develop your own interpretation of the role?

TW: There isn’t a huge deviation from who the character is in the books. A bit of the freedom we have being with Amazon is that we aren’t tied to the same rules as a standard network show. We are able to curse and show a bit more graphic content. With that being when you have that freedom and you make decisions based on just because you can I find that to be a weak move. However people also have to understand that cops do not speak like Boy Scouts. The realism depicted in the books gets a little grittier in the visualization so I think in that way it might be a bit stronger and edgier. The world Bosch inhabits is a fairly dark place as he is not a meter maid. He is dealing with the dregs of society.

AL: Besides the freedoms you already mentioned how has working with Amazon compared to that of network series you have been involved with?
TW: Besides what I mentioned already we are not pandering to the small screen. The show is shot in a cinema type scope which typically you don’t see in network television. There are shows out there like “Mad Men” and “Breaking Bad” certainly have larger elements to them but when I got to see ‘Bosch” on a large screen for 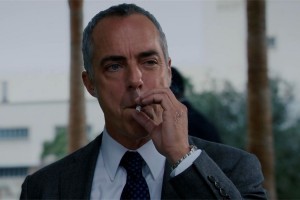 me it was almost more enjoyable. What’s being shot isn’t the standard of what you see in network television. In essence you are seeing ten one hour films. I think there is a lot to be said about the shows look. These guys working on this have great cinematic eyes.

AL: Do you feel these types of attributes will make the series stand out from other shows with similar subject matter?
TW: I think those things are certainly a part of it. Harry Bosch isn’t the guy who solves the case in an episode or two. The journey of this show is what makes it interesting. The story is really told through Bosch’s eyes. As Harry is experiencing things the viewer is also seeing those same things almost in real time with him. I think that makes the show more engaging. The show feels like your reading the book.

AL: Do you have any other new projects you liked to mention?
TW: I had a film come out recently with Ron Pearlman called “Poker Night”. It’s sort of a thriller/serial killer film. It also features Giancarlo Esposito and Ron Eldard. I have a few other things that I am looking at while we are waiting to hear if we have the go to start on season 2 of “Bosch”. I have also started writing a film. I can’t really say too much about that just yet as it is still in the very early stages.