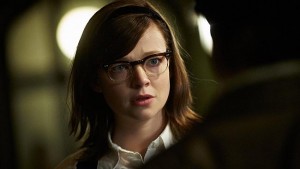 Australian actress Sarah Snook starred in the horror film “Jessabelle” last year and stole the attention of Hollywood due to her performance. Her latest film “Predestination”, co-starring Ethan Hawke, features her in a major breakout role. If you get a chance you must see this film, which hits theaters on January 9th. Media Mikes had a chance to chat with Sarah to discuss the film and her transformation

Eric Schmitt: What interested you in the role in Predestination to begin with?
Sarah Snook: The main thing was really the challenge of acting as such an amazing character. You don’t really ever get to act as a man, if you’re a woman.

ES: What preparation went into playing the role of John?
SS: In the physical, I did some training to bulk up my muscular frame. It helped to get into a very masculine feel, testosterone driven. Everyday I would go to one of those “Pumping Iron” gyms, so I’d be surrounded by those testy (testosterone filled) men, and I’d be like “Yeah, brother! We’re one in the same!” Otherwise, I did a lot of research into transgender and how people adapt to that sort of lifestyle change.

ES: What about your voice? You went from a southern belle in “Jessabelle” to almost a city guy in John, how did you train for the voice acting?
SS: The did help a little by distending my voice in editing. I kinda wanted to look at movies like “Barfly” to study those types of down and out characters, get a gravely tone. It definitely helped 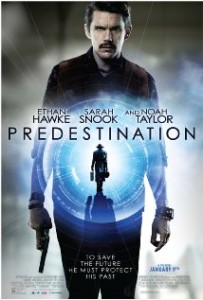 with the pitch bending, though. It gave my voice my color. The difference between those two characters (Jessabelle and John) is really the fun part for me.

ES: It honestly took me a few minutes to even realize that it was you playing John. When I saw it, I was like “Whoa!”. How long did the make up take to transform you?
SS: It was a 3 hour make up job. It was mostly very fine, thin pieces – three or four layers to define my chin, stubble, a broken nose and earlobes. The earlobes were strange at first, but it lengthened my face.

ES: Did anyone mention to you, when you did go through the transformation, that you resembled a young Leonardo DiCaprio?
SS: (Laughs) Yeah, they did! It was also a random group of characters. “Hey, you look like-”.

ES: Did they take you off set to see how you would blend in as a man?
SS: (Laughs) No. No, I was too shy. There was one instance that was great – I was walking with the make-up artist to the set and I was walking ahead of the artist by maybe a meter or so. This group of girls walk past us and they looked about 18 or 19, three girls. They walked past us and giggled at the make-up artist “Oh my god – he’s so hot!” Then one of the girls said “Wait, who’s that other hot guy?!” (Laughs)

ES: That must have been very flattering!
SS: (Laughs) I don’t know about hot! I didn’t think I was necessarily a hot guy!

ES: The bar scenes with you and Ethan seemed very “organic”. How did you and Ethan develop such a natural looking relationship in front of the camera?
SS: We did rehearsal all through production, the two of us with Peter and Michael (Spierig). And also we started working on the weekends, Sundays we would get in the same room and make sure we were on the same page with our characters. With the bar scene, we did that in the 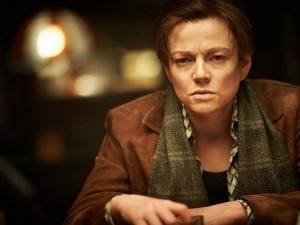 2nd or 3rd week of shooting. So by then, we had developed a pretty good relationship. The best part about the bar scene is that they shot it in one big sequence, which allowed Peter and Michael to just cut it up in the editing room. The whole thing was one scene – the bar, the pool table and the booth.

ES: How do you think the story will translate to audiences? Do you feel that audiences will see Predestination as a “complete” movie, and that they’ll be able to digest the content?
SS: I think overall, the story for me is what was great. It’s a very compelling script and a very compelling idea. It’s something that people can have a debate or dialogue about. All the questions that would come up about the characters and the storyline – audiences can actually engage it.

One Reply to “Sarah Snook talks about her new film “Predestination””