Alejandro Gonzalez Inarritu’s reality-bending Birdman (or The Unexpected Virtue of Ignorance) closed the 52nd New York Film Fest this past Sunday. The film which opens on October 17th stars Michael Keaton as Riggan Thompson an actor trying to distance himself from an iconic superhero film franchise by starring and directing his own broadway production. Keaton’s huge cast of co-stars includes Edward Norton, Zach Galifianakis, Emma Stone, Naomi Watts, Amy Ryan, and Andrea Riseborough, all of whom joined the director at a press conference after the film at AMC Lincoln Center. 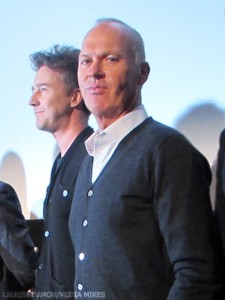 Much of the film revolves around Riggan’s struggle with his own identity versus his public image. Specifically he’s faced with a particularly vicious theatre critic whose sole objective is  to destroy Riggan’s show with her pen. Michael Keaton however maintained that he keeps himself in the dark when it comes to critics now. “This is where I’m really a dope” laughed Keaton who looked at reviews in his early days but not so much recently.  “I thought originally…you should be courageous and read everything and I did that a couple of times and I thought ‘well I’m not doing that anymore!’  Although he did add “Admittedly if someone says ‘hey you had a got nice review’ I’ll read it. I’m open to making myself feel better!” Addressing an entire auditorium of NYC critics he concluded “I think I’ve been treated basically fairly, I know I’m the wrong person to ask…There’s probably a lot of you out there going “Oh no you haven’t!”

British theatre actress Andrea Riseborough, who plays Riggan’s co-star also avoids critical reviews “because [she finds] them debilitating, not because [she doesn’t] respect them” Riseborough added that there’s a certain element of fear when it comes to actors encountering critics, rather than hostility, especially in the world of theatre. “You know, they saw Gambon doing his bit back in the day and now they’re going to come and see me. It makes me just want to shit myself!” 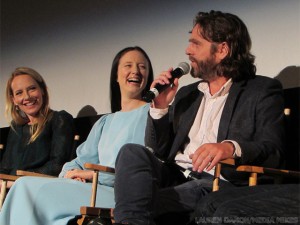 Zach Galifianakis confidently chimed in “I’ve never had a bad review, so I’m not quite sure what you’re talking about. It sounds familiar. I’ve heard people talk about it. But I’ve never had one” cracking up his cast and the audience.

Naomi Watts compared some of her theatre experience to the unorthodox way Birdman was shot: “I can say, I haven’t done a huge amount of theatre, but just from back in the days when I was studying and you know, doing plays then, a lot of my nightmares revolve around being on the stage; And forgetting my lines, or having the wrong clothes on or no clothes at all. So it is that classic recurring nightmare. A lot in the way this film was shot, with this speed and the high stakes and the technicalities and the dependency on each other and the, also the effects, you know the props and things, the cameras, the lighting and the removing of tables and putting them back, you know all those things sort of created this high level intensity and pressure that felt sort of emblematic sort of how it feels on the stage.” 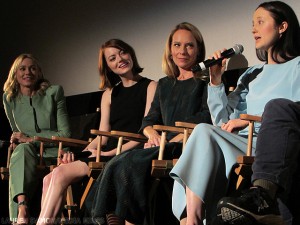 Soon to be joining Watts in stage experience is Emma Stone, who in November will replace Michelle Williams in the current broadway revival of Cabaret. I asked her how she felt between making this film about a movie star entering Broadway and now actually facing that in reality.
“Well, you know, I did write the character of Sally Bowles and I’m directing the production”  the Amazing Spider-man star laughed, then added  “No, I you know, of course this movie brings up a lot of horrible fears of coming into the broadway community and having a Tabitha [the film’s villainous critic]…it feels very different. But I will say that making this  movie and kind of what we had to contend with, as actors, in making something like this, all of the pieces that Naomi was talking about had to–you know, having the table moving out and needing to rely on each other  the way the company does, I think is incredibly helpful now going into theatre in that way and realizing that you’re you know you operate very much as a unit. We all operate as a unit. And in a lot of films it’s not that way at all. It’s a very separate experience. So yeah, I’m nervous as hell. I’m shitting myself!” 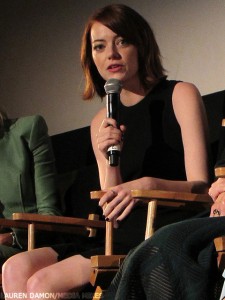 Director Alejandro Gonzalez Inarritu elaborated on the challenge he and DP Emmanuel Lubezki faced in shooting Birdman in mainly long contiunous shots. “Basically all the camerawork, all the blocking and all the lighting was pre-assigned in advance, months in advance. So there was no improvisation everything was precise, meticulously…Without the editing everything has to happen in the flow and then so you have to really get everything together…So the difficulty was the point of view–where this camera would be located to tell the story right. Who has to be in frame or not. Who has to be the listener…The challenge of that was that there was no lights, shooting film lights. Everything was practical lights and sometimes it was 360 degrees in tiny cooridors with guys with microphones. So all that thing that they’re talking about–the things moving and the ‘you have to be behind him’ and then you go under the legs of somebody and then crawl over the other side. It was kind of the kids playing a theatre play and the camera going around with this 17mm lens which is a wideshot. So every bit, every line, every open door has to be performed exactly the 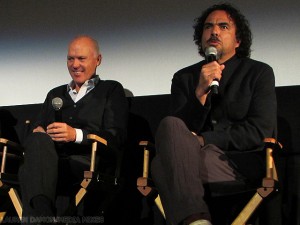 same…it has to be right.”

Actress Amy Ryan described this process as causing a “happy accident” whereby Keaton’s character had to be laying on a dressing room counter top in order to accommodate the camera manuevers “That was the only place really that worked best for every moving part in the scene, boom operator and [Lubezki], myself, Michael. And now I can’t think of a better choice for that, that’s exactly where he should be in that moment.”

Of course with a past Hulk, a Gwen Stacy and an iconic Batman in the room, the idea of the 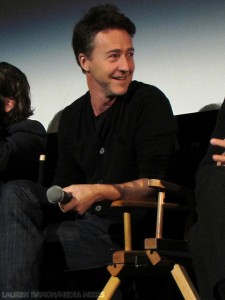 Superhero Film had to be raised with the cast and although the film is definitely not that, it doesn’t entirely shy away from some CGI effects. Keaton was pleased with this “When the special effects come in, I mean it’s just outta nowehere! And I totally dig it. I go yeah, there’s a little treat…A little megaplex action superhero movie dose for you right there…”
He and Edward Norton previewed some footage at New York Comic Con the evening before.  “Michael and I went over to New York Comic Con last night to do a little panel there,” said Norton, “and in the dark right before we went on I looked at Michael and said ‘do think this is the ultimate bait and switch?’ Can you imagine if you go to this actually thinking it’s a superhero movie?”