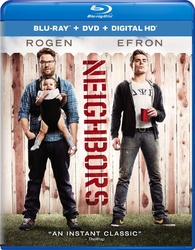 “Neighbors” is definitely one of the best comedies to be released this year…in a sea of slim pickings. The film has some great laugh out loud moments and a great cast. Seth Rogen and Zac Efron are great rivals. Very funny stuff. Dave Franco and Christopher Mintz-Plasse also steals some great laughs as well. Rose Byrne is charming as usual. I have heard people call this the new “Animal House” and I can’t really see it. It is definitely funny but I really don’t see myself calling this a classic and watching it over and over. It was good for a good laugh and I would recommend to friends but it is the not best comedy ever.

Official Premise: By all appearances, new parents Mac (Seth Rogen) and Kelly Radner (Rose Byrne) are living the American Dream – complete with an adorable baby girl and a beautiful new starter home in the suburbs. Still, the early-thirtysomethings want to believe that they have a modicum of coolness left within them. So when they discover that their new next-door neighbors are none other than dozens of Delta Psi Beta fraternity brothers led by charismatic president Teddy Sanders (Zac Efron), they try to play along and make the best of an awkward situation. But when the frat’s parties grow increasingly more epic, both sides of the property line begin to fend for their turf. The neighbors’ relentless sabotage escalates into outrageous one-upmanship, beginning an epic Greek war for the ages.

Universal is releasing the film as a combo pack including a Blu-ray + DVD + UltraViolet digital copy. The 1080p transfer and DTS-HD Master Audio 5.1 surround track are good enough for a comedy. No outstanding but at the same time no complaints or issues here. The special features are not the greatest this release. “An Unlikely Pair” is a meet and greet with Zac and Seth. “The Frat” goes into the characters with the cast. “Partying with the Neighbors” is a promotional EPK. Lastly there are some Deleted/Alternate Scenes and gag reel included.