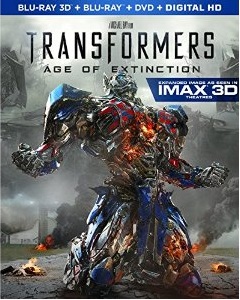 When I saw “Transformers: Age of Extinction” in theaters, I was very optimistic that this was going to “reboot” the franchise. In a sense it did but it also fell right back into the same old thing while doing so. The story like the past “Transformers” films is just chaos. There is so much going on that you just need to dumb down and just watch the action the pretty colors on the screen. That is what I believe will make you enjoy this film. It is also extremely over long. But all that aside, it is still a fun ride. It is also the year’s only $1 billion worldwide blockbuster. So expect a “Transformers 5” real soon.

“Transformers: Age of Extinction” picks up four years after the battle between the Autobots and the Decepticons left Chicago in ruins. Due to this there is an all our war and hunt against the Transformers. The humans are hunting them down under the command of Harold Attinger (Grammer). All Transformers have gone into hiding. We meet Cade Yeager (Wahlberg), a struggling investor, who comes across an old truck while looking for a way to make some money to help save his house and send his daughter (Peltz) to college. What he finds is a very injured Optimus Prime. After fixing him, the race is on to reunite with the remaining Autobots and find out the truth behind the hunt on them.

This review will focus on the Blu-ray features of this release, so if you want more about the film read our film review here. Paramount is releasing this film as a combo pack with a Blu-ray 3D + Blu-ray + DVD + UltraViolet digital copy. “Transformers: Age of Extinction” may not be the year’s best film but it is definitely one of the best Blu-rays. The film simply delivers a stunning 3D presentation. I loved this aspect in the theaters and I love it more at home. It is also mixed with a ton of 1.78:1 IMAX footage, which makes it even more cool, last Blu-ray to this was “The Dark Knight”. This is definitely a film that needs to be viewed in 3D and on a nice big screen. This is a very visual film and it is a marvel to watch in this format.

This Blu-ray for “Transformers: Age of Extinction” also comes stocked with the first EVER brand new Dolby Atmos surround track for ultimate presentation. The track is describes with the following “This audio presentation is mixed specifically for Dolby Atmos® enabled receivers and speaker configurations to produce full, multidimensional sound without channel restrictions in the home — even overhead. Dolby Atmos is compatible with current generation Blu-ray players. Also select this option for Dolby 7.1 TrueHD speaker configurations. For Dolby Atmos playback, set your Blu-ray player to bitstream out and disable secondary audio”. All I have to say is WOW just WOW! I spoke with a composer named Steven Price, who just won the Oscar for “Gravity” and he spoke nothing but amazing things for Dolby Atmos and it’s future.

“Transformers: Age of Extinction” also comes stocked with a nothing short of mind-blowing 7.1 TrueHD track. It is just extremely amazing. When I was watching this film, I couldn’t help but say out loud how much I loved this score. Steve Jablonsky did an amazing job of delivering a really epic score for this film. What I loved is that it is seriously go from soft to freaking insane and still blend so very well. Everything from the constant explosions (we all know how well Bay likes to blow shit up) to the transforming. This track is just plain and simple perfect. Make sure that your picture frames are secured cause this one will give those nails a run for their money.

The special features are almost just as awesome as the audio/video presentation. There are over three hours of bonus content here. First up is “Bay on Action”, which is easy enough the director talking about his craft. There is a super epic, eight-part making-of feature called “Evolution with Extinction”. It dives into everything from casting to filming locations to digital effects. It is runs cumulatively around two hours all by itself. “Just Another Giant Effin’ Movie” shows the lighter side of the production. “A Spark of Design” looks into the creation of Grimlock. “T.J. Miller: Farm Hippie” is a funny set visit with the actor. Lastly there are some trailers and fun spoofs with “Kre-O” and “Angry Birds” included.

Here is a clip from the “Rise of the Dinobots” featurette: