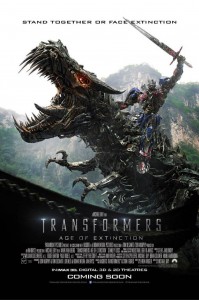 It is that time people…more “Transformers”. Watching this film, I just couldn’t help but think how much Michael Bay like to blow shit up. The film definitely better “Dark of the Moon” but it is just too wicked long. Running in at a very mean 2 hours and 45 minutes, the beginning of this was great, the middle was kind of terrible and the ending saved it for me. I mean who can say no to freaking Dinobots! They only pop up in the end as an accessory to battle but they are still mad cool. Whether you love “Transformers” films are not, I know most critics don’t, but for Bay knows how to give audiences what they want. This film is like I said too long but it is still entertaining and an overall fun time. Either way gear up since this is only the first film in a new trilogy, the fifth and sixth installments are on their way.

The film is a sort of sequel to the last “Transformers”, it picks up four years after the battle between the Autobots and the Decepticons left Chicago in ruins. Due to this there is an all our war and hunt against the Transformers. The humans are hunting them down under the command of Harold Attinger (Grammer). All Transformers have gone into hiding. We meet Cade Yeager (Wahlberg), a struggling investor, who comes across an old truck while looking for a way to make some money to help save his house and send his daughter (Peltz) to college. What he finds is a very injured Optimus Prime. After fixing him, the race is on to reunite with the remaining Autobots and find out the truth behind the hunt on them.

If you are familiar with Michael Bay’s films you should know the story doesn’t always get the most attention. Nonetheless, this is “Transformers” and I just want to see giant aliens fighting other giant aliens. In fact, the fourth time around the Transformers have never looked better. With “Dark of the Moon”, they moved so fast you couldn’t even tell what was going on and who was fighting who half the time. This is much cleaner and they are just bad ass…did I mention already dinobots!? They easily steal the show. Optimus Prime is quite dark in this film much different than the last but never been better. Bumblebee got a clapping applaud when he first hit the screen, definitely a fan favorite. But personally in terms of Transformers, Hound takes the prize for me. John Goodman voiced him and really stole the show and was funny as hell.

With “Age of Extinction”, we get an all-new cast. Mark Wahlberg takes the lead and does a great job. His acting sometimes feels a little iffy but I have to remind you it is a “Transformers” movie. Nicola Peltz plays his daughter, she is definitely a better actress than Megan Fox but I couldn’t get over her spray tan look. Jack Reynor plays her boyfriend and he was a solid newcomer, I can see him getting very big…very quick. We got the chance to interview the Irish actor actually, read here, so keep an eye out for him. Stanley Tucci is a riot as Joshua Joyce and gets a ton of laughs. No question the best new addition to the cast. Kelsey Grammer is also quite the surprise and absolutely bad ass as Harold Attinger.

Besides the action and the dinobots (eek!), there is some other great parts in the film. The band Imagine Dragons have a fantastic song “Battle Cry”, which I immediately downloaded after seeing this film. Michael Bay did a great job of inserting that song into various parts of the film. Steve Jablonsky also delivered an amazing score for this film. In fact, I think it is easily one of my favorite recent action films. It also reminded me a bit of the “TRON Legacy” score as well. So “Age of Extinction” is far from perfect. It is drags major ass in the middle but it is a still a great popcorn flick and will no question take the crown for summer box office.