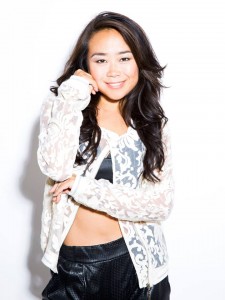 Mari Koda is known for her role as Jenny Kido in the “Step Up” film series. She has been in every “Step Up” film since “Step Up 2: The Streets”. She is returning this week in the the fifth film in the series “Step Up: All In”. Media Mikes had a chance to chat with Mari about the film and her challenges during filming.

Mike Gencarelli: How did you get started with your background in dancing?
Mari Koda: I started listening to music before dancing. I just thought to myself, “Wow, I would love to do something with the music that I love”. So I started dancing and I just started moving. I do not think that I was even any good [laughs]. I never went to school or anything. I just went out there and starting dancing and that’s how I got I into it. You just catch the energy and go with it. I love it. After I started dancing, I wanted to know what the songs were actually about and after that I decided to learn English and move to New York. I love New York because it is so diverse and there are so many different kinds of people. I knew this is where I belong. In Japan, there are too many Japanese people [laughs].

MG: “Step Up All In” takes us to Las Vegas, what was that like going from the streets to the Sin City?
MK: It was just amazing. Just Wow! We came this far! We are in Las Vegas. There is a lot of surprise in this new film. Even working on the film, we were all impressed with what happens. I am just lucky to be in the film.

MG: How has Jenny Kido changed at all over the course of these four films? 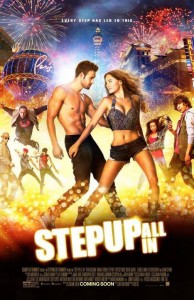 MK: I have played Jenny in four films now. She has never had a love interest in the films. Does this girl never fall in love? Can I at least hold somebody’s hand? [laughs] In the movie, I quit my job and come to Vegas to support my friends but she never has a boyfriend. I told the producers about this and they asked me if they do a “Step Up 6”, who would I choose for a boyfriend? I told them “JT” and they asked “Who” and I said “JT…Justin Timberlake”. So I figured it can’t hurt to ask [laughs].

MG: This film brings back Briana Evigan and Ryan Guzman to lead roles along with others like Alyson Stoner; what do you enjoy most about the continuity of the cast in these films?
MK: We have grown up so much together. It is just so much fun to work together. We are laughing all the time. Rehearsals are just a blast and getting to catch up with everyone. With a normal movie series, there is usually a different cast but not with these films. Like with me and Moose, he and I are always coming back. So it is really great.

MG: When co-starring in “Step Up 2: The Streets”, did you ever think you would have been in three follow-up sequels for this franchise?
MK: No, not at all. I was surprised that there was even a “Step Up 2”. I had no idea what I was going to do in the movie. I knew I would be in it as either “Dancer 1” or “Dancer 2”. But I had no idea about my character and I was really excited. Everything I did in “Step Up 2” was all improv and I was just excited that I ended up 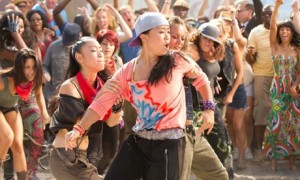 staying in the movie. Jenny Kido stood out. I didn’t even know what would happen after that. I even went to the audition for “Step Up 3” and Jon Chu, the director, was like “What are you doing here? You are already in the film”. So that was so awesome!

MG: What was the most challenging aspect of this film compared to the others?
MK: Well I actually got hit by a car in this film for real. I was in the hospital for a while. It was very challenging for me. The doctors told me that I needed to stay in the hospital for at least two or three weeks and that I couldn’t do anything. I told them if they told the producers I’d punch them! [laughs]. So I carried around an ice pack with me wherever I went. Everyone was so supportive of me and I got a lot of positive energy. In the finale scene, I have this little solo and I struggled through it but I was able to nail it, which was great.