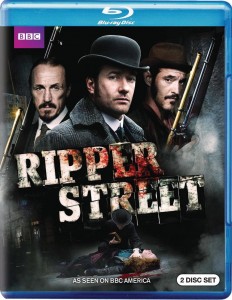 When I saw the trailer for “Ripper Street” on BBC America, I was immediately hooked.  A crime drama based around the killings of Jack the Ripper…where do I sign up?  This new series includes eight episodes which are each more incredibly gripping than the last. The show also boasts a very sharp cast including Matthew Macfadyen (“Anna Karenina”), Jerome Flynn (“Game of Thrones”), Adam Rothenberg (“Alcatraz”) and MyAnna Buring (“Downton Abbey”, “The Twilight Saga”).  The series is very character driven. This works perfectly since from the very first episode, you really find yourself loving this cast. I wish the series was longer, but at least we have something to look forward to since the series was already renewed. BBC American is bringing this show back in early 2014 with another eight episode series. Count me in! Until then be sure to pick this up and play catch-up with this.

Official Premise: BBC America’s compelling crime drama Ripper Street set in the seething backstreets of Victorian London comes to Blu-ray! Haunted by the failure to catch London’s most evil killer Jack the Ripper Inspector Edmund Reid now heads up the notorious H Division – the toughest police district in the East End. Charged with keeping order in the blood-stained streets of Whitechapel Reid and his men find themselves fighting to uphold justice and the rule of law; but always in the background lurks the fear of the Ripper is he back for another reign of terror? Rich episodic storylines meld with the intrigue of a criminal underworld festering on the hard streets of Victorian London following the battle of the men whose job it is to bring the law to the lawless

The Blu-ray presentation is decent but nothing special.  The episodes are presented in 1080i, which still looks sharp but could have been given the little extra effort that was required to make it a full HD Blu-ray. Same goes for the audio, which is an DTS-HD Master Audio 2.0 surround track.  This works well with the show, since it is very dialogue driven.  Also the score is blended nicely here as well. I just would have like to seen them go the extra step to upgrade to the 5.1 track. The special features are decent as well for this release, though no commentary tracks.  There are three “Inside Looks” from the cast and production team. “London Calling: Whitechapel” is a tour of the Dublin, Ireland transformed into London’s East End during 1889. “Jack the Ripper: Prime Suspect” is a look into modern forensic science and its part in solving the case of Jack the Ripper.  Lastly there are some character profiles included.