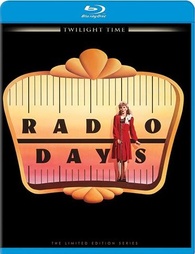 A few years back I became very much obsessed with music from the 30’s and 40’s. I am a huge fan of Woody Allen but I have to admit, I have never seen this film prior to this release. It packs a wonderful cast including Mia Farrow, Dianne Wiest, Danny Aiello, Jeff Daniels, Wallace Shawn, Seth Green with Woody Allen narrating. I literally was watching this film speechless during certain points just completely in love. The music, the acting, the writing. Woody Allen never lets you down. A must have if you are a fan of Woody Allen, no question.

Official Premise: Writer-director Woody Allen’s tenderly nostalgic, joyously funny Radio Days (1987) is a vignette-packed memory piece about growing up in Brooklyn in the 1940s, obsessed with the music, entertainment, and news of the wide world brought into every household via the magic of radio. A young Allen surrogate (played by a teeny red-headed Seth Green) lives with his parents (the wonderful Julie Kavner and Michael Tucker) and extended family in the wind-swept Rockaway neighborhood, their daily routines spiced by the glamour, excitement, thrills, and even occasional doses of grim reality coming to them over the airwaves.

This Blu-ray release is an Screen Archives Entertainment Exclusive and is a Limited Edition release with only 3000 copies produced. This film is delivered with a looks good with its 1080p transfer in 1.85:1. The DTS-HD Master Audio Mono also works perfect with the dialogue and the music. Oh the music is so fantastic with some amazing songs from the 30’s and 40’s that intertwine so well with the film.
In terms of special features, besides some trailers, there is only an Isolated Music and Effects Track includes, which is a bit of a letdown. Nonetheless, Twilight Time has been releasing some great Allen films over the last year and change, so I hope that they are planning on continuing this.