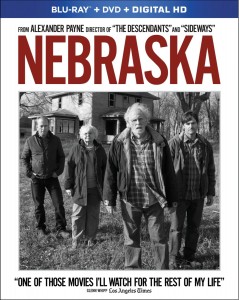 Alexander Payne’s films are usually quite unique and different than standard film. “Nebraska” looked different right from the start since it is filmed in black and white. Personally, I feel like it is a little too long running nearly two hours. I think this would have been much better running at 90 minutes. It does have some amazing performances from Bruce Dern, Will Forte, June Squibb, Bob Odenkirk. Everyone thinks of Will Forte as just a funnyman and he is quite funny in this but he also has a great dramatic side. This might not be for everyone but I enjoyed it’s subtle aspects.

Official Premise: From Academy Award winner Alexander Payne, the director of Sideways and The Descendants, comes the film that critics are calling “An American Masterpiece.” When a father (Bruce Dern) and his adult son (Will Forte) embark on a journey to claim a million-dollar prize, what begins as a fool’s errand becomes a search for the road to redemption. Discover why Nebraska is “one of those movies I’ll watch for the rest of my life.”

Paramount delivers this combo pack including a Blu-ray + DVD + HD Digital UltraViolet copy. The 1080p transfer is solid and works well with the black and white shot film. I thought that the choice to shoot this film this way really added a lot of character. The audio consists of an interesting choice with it’s DTS-HD Master Audio 3.0 track, this is a different choice but it works well. There is only one special feature included on this release but it does cover a decent amount of ground looking behind-the-scenes. “The Making of Nebraska” looks into the script, cast and characters, locations, shooting in black and white and more. Would have loved to see a commentary track for this film.