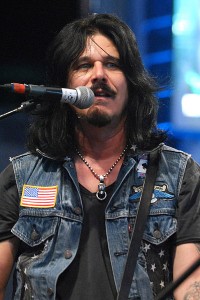 Gilby Clarke is a guitarist/producer best known for a 3-year tenure as the rhythm guitarist of Guns N’ Roses replacing Izzy Stradlin in 1991. Following his departure from the group, Clarke began solo career as well playing guitar with a number of groups such as Slash’s Snakepit, Heart and Nancy Sinatra, Clarke recently announce he will be heading out on the road this summer for a solo tour along with Quiet Riot and Faster Pussycat. Gilby spoke with Media Mikes recently about the upcoming tour as well as his new single and the new video for his song “Tijuana Jail” which was originally released in 1994.

Adam Lawton: Can you give us some info on your new single?
Gilby Clarke: I had been trying to put a record together however I just wasn’t happy with things. In the past I always put a record out when I felt I had 10 or 12 strong songs that I would be happy listening to. I just didn’t have that and to put something out that I ‘m not happy with was not what I wanted to do. I decided that I am just going to release singles now. I have a couple tours lined up so I figured I would put out one good song and then follow it up with another a couple months later.

AL: You also recently released a video for an older song of your “Tijuana Jail” correct?
GC: Yes. Before I dropped the new single I wanted to put out a few other points of interest. “Tijuana Jail” is an older song as it came out in 1994 but it’s the most popular song when I play live. We play the song differently now than we did 20 years ago so I wanted to do a video for the song and put a new touch on it. When I originally recorded the song Slash played the solo so to go all these years with a song I didn’t play lead on was something I wanted to fix. (Laughs) We worked on the song at my home studio and it’s really just a recording of our rehearsal of how we do that song live.

AL: Can you tell us about your upcoming summer tours?
GC: Over the past 10 years or so I have been playing as a trio. When I first started doing my solo stuff I always had another guitarist with me. As the years changed it started to become more fun to just do things by myself. I like the challenge of makes a multi guitar song in to a single guitar song. I am having a lot of fun doing things this way and that’s really what it’s all about. For my solo tour I’m going to be going overseas for some shows including a show in Hungry which is a country I have never been to before as a solo artist. We also will be hitting Spain which is another place I haven’t been to in awhile. After that wraps up I will back in the states for a summer tour with Quiet Riot and Faster Pussycat.

AL: What do you find to be the biggest difference in performing overseas as compared to here in the states?
GC: The biggest difference I have noticed performing overseas is that a lot more people come out to the shows. In the states the rock market is sort of fashionable and it goes through phases of being cool or not. Right now big bands like Black Sabbath and Aerosmith are doing great but smaller bands like mine are having a tough time unless you do a multiband line up. My solo band is more of a club band and right now clubs are rare in the states. Things are the complete opposite overseas as there are tons of clubs to play and the scene is thriving.

AL: You recently performed with Guns n’ Roses minus Axl at the Rock Hall inductions can you tell us a little about that?
GC: Most of the Guns guys still play together quite often. The hard rock scene is relatively small and we all know 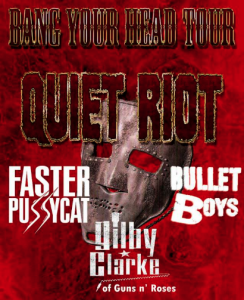 each other fairly well. What was different about the Rock Hall show compared to the other times we have gotten together was it was specifically Guns n’ Roses tunes. It was a little strange playing some of that material as I had never performed it with some of the other members. I had played with Steven Adler before but we never did any Guns material. It was both interesting and fun as Steven has a completely different feel than Matt Sorum who I played with more often. Personally I had the time of my life and I think we did a great job under the circumstances. It’s something I will never forget.

AL: What were the rehearsals like leading up to the performance?
GC: We really only decided to do the show a couple days before. Duff had called me I think the Thursday before the induction he told me they had decided to play and they wanted me there. I couldn’t refuse my friends. I know Izzy is the guy’s first choice and I get that as I am a fan of the band myself. Knowing Izzy wasn’t going to be there I was happy they asked to be a part of it.

AL: Was there any animosity leading up to or during the event?
GC: We all knew that Axl wasn’t coming. We all got the same information as everyone else. There was no extra phone call or anything like that. In a way that sort of lifted what could have been a black cloud over everyone’s head. I do think however that if Axl had shown up things would have been fine. It’s been a lot of years and this was a celebration of the band and the fans that supported it. I don’t think there would have been any problems but that black cloud was there. We just all went about our business and didn’t really mention his name. Duff did a show in Cleveland the night before and I think it was about 1 or 2 in the am when we all finally got together. We did a few songs with Matt and a few with Steven and then went and did the show. I think we kicked ass and it turned out well.