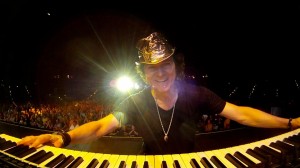 Lawrence Gowan is the lead vocalist/keyboardist for the legendary rock band. Earlier this year, they announced their 2014 summer tour titled “Soundtrack of Summer”, which will feature a co-headline with Foreigner and former Eagles guitarist Don Felder. Media Mikes had the chance to speak with Lawrence Gowan about their upcoming tour, creating new music and his thought’s on being a member of Styx for 15 years.

Adam Lawton: Can you give us some info on the bands upcoming tour?
Lawrence Gowan: We will be out this summer with Foreigner and Don Felder. We have toured the states with Foreigner in some time. We did some shows with them over in England and we realized that the pairing of the two bands was just really great. We wanted to add a little more to the bill like we had done last summer bringing Ted Nugent out with this. This year were brining Don Felder formerly of the Eagles. It’s a great night of entertainment when you can add a third element that takes things over the top. We had done a show last year with Don and it was fantastic. The fact that he has written so many of those Eagles classics that people know is great but he also has an amazing band as well. We added him to the mix and now fans will get 3 hours of music that they know all the words to. The tour is being call the “Soundtrack to Summer” tour and I think that is very fitting. It definitely describes our experiences from playing in the U.S. and Canada. I think people will probably be tired from singing after it’s all over.

AL: The last tour featured Styx performing the “Pieces of Eight” and “Grand Illusion” albums in their entirety. Will the band be picking different albums to perform for this tour?
LG: I don’t think it will be this time. The evening is very much hit driven so I think people will be hearing all the songs they know. Having performed albums in their entirety I have found this to be a curious thing. The big thing is that audiences seem to keep getting younger and younger. So many people seem to have discovered classic rock in the last 10 years. At our shows we see younger people enjoying the experience of hearing some of our albums in their entirety. They seem to share their enthusiasm for both our hits and other tracks from the various albums that don’t get as much 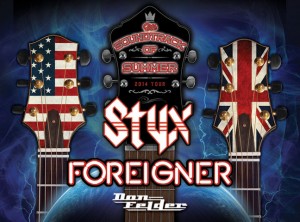 play. One of those tracks is “Man in the Wilderness”. That song was never released as a single and it has become a huge favorite. Of course we will be playing “Come Sail Away”, Blue Collar Man” and Renegade” as they are some of our corner stone’s but we can change our set a little to hit some of those more obscure songs which have become peoples favorites over the years. There’s going to be diversity in the night with an element of cohesiveness among the three bands.

AL: Being this is not the bands first time out in a multi-band tour format how do you go about keeping the shows fresh and new from year to year?
LG: That’s our task. It just so happens that we are band who is up to that challenge. We love hearing from fans that the show was even better than the last time they saw us. We are always trying to figure out ways to elevate the show and play the songs better than we have before. A song is a living thing. It’s not stagnant piece of music that stays the same. Every time we play one of our songs it’s going to be a little different. Each night songs take on new meaning for us when we play them. Each day is new and it’s another opportunity to try and get the song right. There is a lot more going on with the music than just being a collection of notes. There are feelings and emotions that need to be navigated every time you play a song. That’s our challenge. In addition to that Styx is a band of 5 front men. Everyone on stage is a great entertainer and musician. I think that’s why the audience is so engaged in what we do. We have a tremendous connection with the audience and we are certainly aware of that. The combination of the band, the song and the audience is infectious. We love what we do and constantly want to do it better.

AL: As an artist I am sure you always want to be creating new material however, does the fans wanting to hear the bands previous catalog make it tough to introduce new material?
LG: There is definitely a balance. We did a full album about 10 years ago that we are still trying to play as much as we can. It hard to squeeze a song in to the set but when we have the chance we will do that. We also had a cover album come out where we did a cover of “I am the Walrus” and that ended up being a big hit with classic radio stations. We try and get that one in there whenever we can. We have been trying to put out some new pieces when we can. We also have re-recorded some of the classic Styx songs and added new pieces to those. We always look for the opportunities to add something new. We also have to try and grapple with the reality of the music industry right now. The one thing that can’t be downloaded or replicated in any way is the live experience. That’s what people are drawn to.  Every show is different 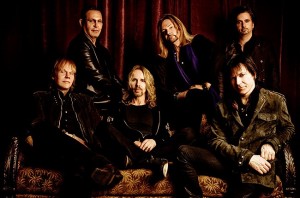 and its own separate experience.

AL: This May will mark your 15th year as a member of Styx. When you first joined the band did you ever envision being where you are today?
LG: I have had a really fortunate career. I had a successful solo career in Canada prior to joining Styx and was able to garner a big enough audience to where I could one day perform with Styx in 1997 when they came to Montreal. That led to the second half of my career where I get to be a part of this legendary band. Not many people can make a claim like that. My career has gone backwards in that I had the long solo career and then a lengthy band career. I really have enjoyed the whole thing. There is always something more you want to accomplish but when I am beating myself up about that I look at where I am and see how fortunate I am. It’s a very unique situation and I am so grateful to be part of this.