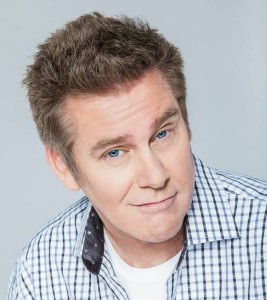 Brian Regan started off in the comedy business after his 1997 CD, “Brian Regan Live” took off and became a huge success. Since then we have been non-stop touring, has worked with Jerry Seinfeld and has appeared on “The Late Show with David Letterman” over 25 times. Media Mikes had a chance to chat with Brian about up summer comedy tour, which makes a stop in Orlando FL on June 21st. and about his amazing career as a stand-up comedian.

Mike Gencarelli: Tell us about your current tour this summer with upcoming stops in Orlando, FL?
Brian Regan: If people like music and dancing and comedy, come on out because I offer one third of that [laughs]. I never know how to sell my own show. It’s me just doing my comedy and that is kind of it. I love the simplicity of it. It is also fascinating to me being off stage before the show starts and you look out and see a microphone stand, a stool and a bottle of water…then you go “Wow, that’s it…that is all I got out there” [laughs]. The simplicity is beautiful and I love the challenge of it.

MG: What do you do to prepare for each show?
BR: I am not like some people that have a crazy routine they have to follow. I will re-tie my shoes though. I know it sounds goofy but the thought of having a shoe untied on stage kills me for some reason. I had a shoe untie when I was on stage a couple of years ago and it just felt incredible awkward, you know? I had to try and put the mic under my armpit and tie my shoe…and you have a thousand people watching you [laughing]. They are thinking “This is supposed to be entertainment…not watching a guy tie his shoe”. It just felt wrong.
MG: …Wow, I can’t believe that he double knots [laughs]
BR: [laughs] Yeah, maybe I should invest in those kids’ Velcro shoes or something, I don’t know.

MG: How do you blend your classic work with your new material when you perform a live 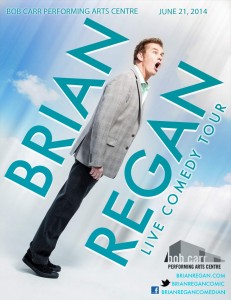 show?
BR: When I first come out, I do about an hour and that is the most recent material from the last few years. This is the show that I am working on, so to speak, is the more recent stuff…the fresher stuff. Then usually, I will say “Goodnight” and then come back out and do a little encore. During that time, I might do a handful of bits that people are more familiar with and they will be able to shout out and so on. I like having that line in the sand to delineate between the two. It would be awkward for me to just do old bits. I would feel a little stale.

MG: I saw one of your shows a few years back and people kept calling out for classic bits…
BR: It is an interesting dilemma. I am honored that people know my stuff and want to hear it. My fans are very cool. They usually know that for my first hour they let me do my thing and they know they will have an opportunity at the end to shout out. You can get some people shouting out in the middle of the show “Do Donut Lady! Take Luck!” I usually just smile, nod and go back to my new stuff [laughing]. I try and nice guy it and usually they get the hint. Some people don’t get the hint and they keep yelling and then I have to tell them the process and how I will get back to that stuff once I plow through this new stuff. Then if they heckle a third time…I have them shot with a BAZOOKA! [laughs].

MG: Congrats on recently making your 26th appearance on “The Late Show with David Letterman”, the most of any comedian; how does this feel for you?
BR: Thanks man, I am very honored by it. There was a day that I couldn’t even get on the show. I had auditioned a couple of times. They were intrigued but never pulled the trigger on me. When I did get on the show, it meant the world to me. Doing the one means everything and the moment you are done, you think “Wow, was it good enough to get a second” [laughs]. Automatically you have a new goal. It is like crossing the finish line at a marathon and wondering where the next 26 miles go to. I obviously did well enough that I was brought back a second time and I was able to just get some traction on that show. Clearly Letterman and the show seemed to like me and it just feels tremendous to have this constant national booster shot that I can get on the show about every nine months.

MG: Along with David Letterman, you have many big named celebrities like Jerry Seinfeld and Patton Oswalt praising your work; does that add any pressure to how to perform?
BR: Nah, listen I am incredibly honored by it. When you have people who do what you do like what you do. It is like the ultimate compliment. I don’t put any extra pressure on my shoulders. What is the expression…”you dance with the one that brung you”. I just do what I always done. I just try and come up with stuff that I think is funny. I just do my thing. What I like is turning the material over. To me, that is one of the thing that has really helped me along the ways. Every couple of years, I feel like I have another hour of material under my belt. So people tend to keep coming back. So I try not to worry about what other comedians will think. I am honored that they like what I do but I think they like what I do because I do what I want to do [laughs].

MG: How do you feel that stand-up has changed since starting back in the mid-90’s?
BR: The technical side of things have definitely changed. It gives the average Joe Blow out there in the entertainment world a fighting chance, especially if the powers that be aren’t inclined to give them a fighting chance. Back in the day when it was just TV, you needed to convince “The Late Show” or “The Tonight Show” that you were funny. Then getting on one of those, I am going way back here, was sort of being knighted. It put you into the forefront. Now things are much more fractured, there is many ways to get content out there. Anybody can tape themselves and put it up on YouTube. If they have some jets then they might be able to get some traction, which could lead to the higher ups taking notice. So for the most part it is good but there is just a sea of content out there and in some ways makes it harder to break through. There are a million people with a million clips.