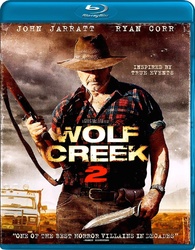 Maybe I am getting old but torture films really don’t do it for me anymore. “Wolf Creek” was a 2005 Australian horror film that has collected a bit of a cult classic. I saw it once and completely forgot about it, to be honest. I wasn’t really expecting or hoping for a sequel. Well, either way here it is and it is more brutal and violent that the first film, but like I said that doesn’t necessarily mean a good thing. I could be losing my taste for the unnecessary “violent” gore, violent being the key word. John Jarratt does play a good baddie though with the infamous local killer Mick Taylor. I just personally would have left this as the one film.

Official Premise: Lured by the promise of an Australian holiday, exchange student Paul visits the notorious Wolf Creek Crater. His dream Outback adventure soon becomes a horrific reality when he encounters the site’s most infamous local, Mick Taylor (John Jarratt). When Paul attempts to flee, Mick pursues him across a hostile wasteland and eventually drags him back to his underground lair. After seeing the true magnitude of Mick’s monstrosity, Paul’s only hope of surviving, where no one has before, will be to use every ounce of cunning to outwit the man behind the monster.

Image is releasing this film as a Blu-ray combo pack with a DVD also included. The 1080p transfer is actually quite impressive. I loved the way the film was shot and it was quite gritty yet also sharp. The DTS-HD Master Audio 5.1 track also worked well with the action and bone-breaking violence (if you like that short of thing). In terms of special features, there is only two quick extras included. “Creating a Monster: The Making of Wolf Creek 2” is a look behind-the-scenes into the making of the film. Lastly there is a few deleted scenes included under “Butcher’s Cut”.