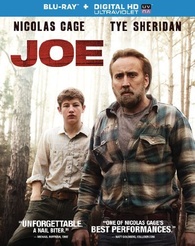 Everyone gives Nicolas Cage a hard time but I think the guy is amazing. “Joe” is no question of his best recent roles. It is powerful and very intense. This is the old Nicolas Cage. He is back! Director David Gordon Green has done indie films like 2000’s “George Washington” to big comedies like “Pineapple Express”, but it is nice to him him get back to his indie roots. Tye Sheridan broke out big after his role in Jeff Nichols’ “Mud” and this just continues the trend. This film got no attention in theaters, which is a shame since it deserves it. I highly recommend it!

Synopsis: Nicolas Cage delivers an intensely powerful performance as Joe, an ex-con with a hair-trigger temper who is trying to stay out of trouble, making an honest yet meager life for himself, and the unlikeliest of role models. But when he meets a troubled 15-year old homeless boy (Sheridan) in need of help from a violent and destitute father, Joe is faced with the heart-breaking choice of redemption or ruin.

Lions Gate is releasing this film as a combo pack with Blu-ray and Ultraviolet Digital Copy included. The 1080p transfer is very impressive. Green’s eye for picking out amazing shots have always been impressive. It is also complemented by the amazing visuals shot by Tim Orr. The DTS-HD Master Audio 5.1 track is also very effective. The special features are a nice bonus as well. There are two featurettes “The Making of Joe” and “The Long Gravel Drive: The Origins of Joe” and some deleted scenes. Lastly there is a solid audio commentary track with director David Gordon Green, composer David Wingo and actor Brian D. Mays.