Levi Benton is the lead singer for the Metal-core band Miss May I. The group has just released their 4th studio album titled “Rise of the Lion” which debuted at number 21 on the US Billboard chart. Along with the release of the new album the band will also be a part of this year’s Rockstar Energy Drink Mayhem Festival. Media Mikes spoke with Levi recently about the creation of the new album and what they are most looking forward to about this summer’s tour.

Adam Lawton: Can you give us some info on the recording of the new album?
Levi Benton: This time around we were really able to give the album more of a grown up sound. We had time to sit down and really think about the record as a whole as our last couple albums were done in between touring so our time was limited. With “Rise of the Lion” we were able to just focus on the album and not worry about anything else. This record is more diverse and one that I think that will be a timeless record that doesn’t get old. This record is a lot more than just riff after riff. Having producer Terry Date involved helped make the record diverse along with giving it a really old school metal sound.

AL: The new album is very melodic. Was this something that happened consciously or just came out naturally as the sessions progressed?
LB: I think that element came out due to the fact of having that extra time to work on the songs. We went in with the record written and then Terry put us in stations and had us rewrite the songs as much as possible. The songs heard on our previous releases were pretty much the first draft of those songs. With the new record your hearing songs that were rewritten at least five different times. What you are hearing is the best of the best. I think that’s what brought the melody out in a lot of the songs.

AL: At what stage of the process do you generally start bringing lyrics in? 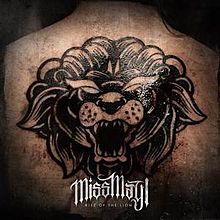 LB: We always do lyrics last. I like to divide out the sounds and see how I feel about each one. I really try to wait until the song is basically fully written before I add my parts to it. I think it’s easier for me than trying to add lyrics then because if something needs a little bit of changing to fit a lyric or something then we can just length or shorten a section.

AL: Can you tell us about the videos you guys shot for this release?
LB: Prior to the album’s release we shot three separate videos. Two of those have been released so far and the last one will be coming out shortly. This third video is probably our most cinematic release to date. It’s a bit gory and was a totally different vibe for us. I can tell everyone that we shot it in black and white.

AL: What are you guys looking forward to most about being a part of this year’s Mayhem Festival?
LB: I am looking forward to playing for a heavier crowd. Some of the tours we have done in the past we were the scary band that made everyone run so it will be great to get up there in front of giant families of metal heads.

AL: What was it that appealed to you most about going out on a package tour as opposed to a solo headlining tour?
LB: The new record has put us in a whole new world. We sort of started the transition with our last record and we have continued following through with that by going out with bands like Five Finger Death Punch, Trivium and Killswitch Engage. That has helped us find our place in the metal world and led us to signing on to play Mayhem with groups like Korn and Cannibal Corpse. It’s going to be great to get up there in front of fans that just completely love metal music.

AL: What are the bands pans after the Mayhem Festival wraps up?
LB: We will be out this whole year promoting the record. There are a bunch of things in talks but I can’t talk about them just yet for fear of getting my hands chopped off. (Laughs)