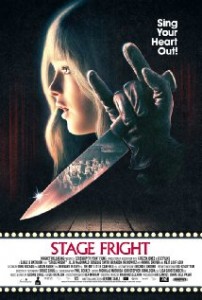 If there’s one musical slasher to see this year, it’s “Stage Fright”. Or maybe it’s this summer’s gory ode to musicals. Or maybe it’s 2014’s catchiest, disillusioned fantasy about someone who wanted to see all the theater kids at their school slaughtered. Regardless of the movie’s intentions and lack of settling on a genre, “Stage Fright” is one of those guilty pleasures that combines two unlikely affections, Broadway and horror.

I must admit these are both guilty pleasures of mine. I have “Wicked” on my iPod and “Cannibal Holocaust” in my DVD collection. While “Stage Fright” doesn’t quite meet the satisfying highs that both of these make within the context of their own category, it manages to stitch together a working piece of parody that provides some hearty laughs and a string of snickers during songs. At times it’s surprising how much more fulfilling the corny songs are than the eventual killings.

The movie presents us with two siblings, Camilla (MacDonald) and Buddy (Douglas Smith), the children of a murdered opera diva, Kylie (Driver). She’s stabbed to death by a freak wearing the mask of the villain in the musical she’s performing in, The Haunting of the Opera. The murder goes unsolved and the young ones are taken in under the care of one of Kylie’s former lovers, Roger (Meat Loaf). Fast forward to 10 years after these events, the two children are all grown up and toiling in the kitchen of Roger’s dilapidated summer camp for theater kids. The deeply in debt camp allows it’s summer time students to put on their own plays and this summer, they’re putting on a Japanese version of The Haunting of the Opera. Once again another psycho, this time donning a Kabuki mask, stalks the sets and bides his time before he can kill the young campers.

The cheesiness seeps into nearly every line of dialogue and shows that director Sable has a deep appreciation of horror and the musical styling of theater. For every reference to “Hellraiser” and “Friday the 13th”, there’s an obvious nod to “Phantom of the Opera” and unforeseen wink at “Glee”. While the blueprints are obvious, Sable’s final product is a bit shrouded. The straight face acting would lead you to believe this is a parody, but to the astute viewer, the potpourri blend of humor, theatrics and midnight frights are an homage to Sable’s influences. I can understand why this can be off-putting to viewers hoping for one or the other.

Despite having to play the shy girl that eases out of her cocoon throughout the running time, MacDonald really blossoms when panic sets in. And if that’s her actually singing in this movie, I can’t believe this incredibly attractive 26-year-old actress only has 20 acting credits to her name. While Minnie Driver gets her name near the top, her short screen time and quick murder appears to be a bow to “Psycho”. Meat Loaf really steals the scenes he’s in and in my humble opinion, needed more opportunities to really belt one out and stretch those monster vocal cords of his. Not that I’m complaining that Sable was able to nab Meat Loaf for another rare on-screen singing role.

“Stage Fright” is far from perfect and definitely needs to be refined, but the nucleus of this movie is fun enough to turn a blind eye to its predictability. I wouldn’t actually mind seeing a stage performance of this movie with a lengthier amount of time given for silly songs and a splatter zone for audience members. It worked for “Evil Dead: The Musical”. Sable’s next project will be featured in “The ABC’s Death 2”, which might show us which one of his talents is stronger, music or violence. Until then, relish in the absurd tongue-in-cheek goodness that “Stage Fright” gives in every octave.