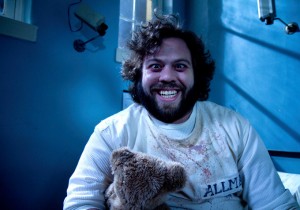 Dan Fogler is a man of many trade. The guy is an actor, director, artist and even won the 2005 Tony Award for Best Featured Actor in a Musical for “The 25th Annual Putnam County Spelling Bee”. He has been in films like “Balls of Fury”, “Faboys” and also voiced the character Zeng in “Kung Fu Panda”. Dan’s latest film is quite personal to him and helped him achieve a personal journey. It is called “Don Peyote” and he not only starred in it but also wrote, produced and directed it. If you get the name it is definitely quite the trip but really gives Dan a chance to show off his very impressive acting chops. Media Mikes had a chance to chat about the film and the long road to hitting theaters on May 16th.

Mike Gencarelli: What the hell were you on when you came up with this crazy film, “Don Peyote”?
Dan Fogler: I am saying there is probably a strong foundation of THC in there. Then you have to add in on other aspects of hallucinogens along the way in a very Alice in Wonderland-esque fashion [laughs]. I have heard from some people that while watching the movie they get a buzz off it since it is such a trip. The film is sort of like my homage to “The Wizard of Oz”, where it goes black and white to color. Our character goes from a everyday Joe to a complete nut case and he sees this lush and colorful world.

MG: Tell us about the road to getting this film released on VOD now and in theaters on May 16th
DF: I started this film back in 2011 and I just wanted to make a movie about the energy that I was feeling at the time. A lot of people were going through it wondering what would happen at the end of 2012 with the Mayan Calendar. I was also about to get married and was stressing out a little about what the future would bring. So I wanted to document that and I decided to create this character Warren Allman, who was essentially like the “every man”. In the film he finds his purpose, which is to find what is coming at the end of 2012. He goes to the several steps of fearing it, then trying to prepare for it and just embracing it. I have always been fascinated about the guy standing on the side of the street with 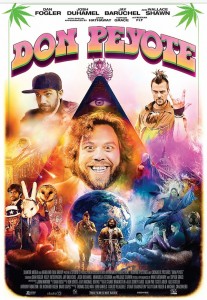 “The end is near” sign. How the hell did he get like that? [laughs]. Did it just appear like that? Or just drop out of a space ship? [laughs]. So Warren goes under this entire transformation throughout the film.

MG: Tell us about all the hats you wore for this film including directing, writing, producing and acting?
DF: Yeah, well a lot of it came out of necessity. I wanted to together a nice juicy role that I could get into it. A lot of it was just something that I was going through that I really wanted to document. I wanted to go through a journey and answer some questions about myself and I did that through this movie.

MG: How did you end up co-directing with Michael Canzoniero?
DF: I love him. He is a buddy of mine. The movie was just made with friends and with asking a lot of favors. We didn’t have a lot of money. When I made my first movie “Hysterical Psycho”, I thought that it was like going to camp. It was such a great experience of casting my friends and working with them. So I just did the same thing but on a slightly larger scale with “Don Peyote”.

MG: This role is quite dramatic as well as funny, tell us about ow you approached that aspect?
DF: I wanted to show off other sides of my acting. That was probably the catalyst for starting this film. I have also always been interest in that prophet journey and what would it be like to be a modern prophet. Plus at time, the energy globally was so phonetic. It seemed like the dial was turned up and I wanted to capture that in the movie. You have stuff like Occupy Wall Street happening and there were riots happening everywhere. It felt like people were just waiting for something to happen. I feel that post-2012, we are starting to get more of a positive vibe coming in here and that really was the message of the movie. Everything comes in waves. Things can be rough and hard but then around the corner you find happiness.