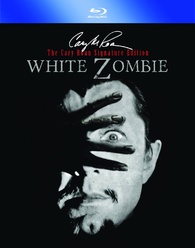 Bela Lugosi is a legend in the horror business. He gave life and a face to the name Dracula that have lived on for over 80 years. “White Zombie” was a film it did just one year after “Dracula”. In fact, it was also claimed for being the very first zombie movie many many years before George A. Romero did it with “Night of the Living Dead” in 1968. The film has become such a classic among horror fans. The black and white atmosphere in this adds such character to the settings. This is no question best presentation available to date that I have ever seen. If you are a hardcore horror fan and have been holding out, this is the one you want to purchase.

Official Premise: Wealthy Plantation owner Charles Beaumont (Robert Frazer) turns to Voodoo Master Murder Legendre (Bela Lugosi) to lure the woman he loves Madeline Short (Madge Bellamy) away from her fiancé Neil Parker (John Harron), by turning her into zombie. Murders intention are to keep Madeline for himself. Neil seeks out Murder Legendre to break the Zombie spell and return Madeline to the world of the living.

VCI Entertainment has delivered this film under a Cary Roan Special Signature Edition with a new 4k HD transfer of his 35mm film materials. If anyone has seen the fairly recent Kino Blu-ray release of this film you probably haven’t seen the best of reviews. Well this one is not perfect either but it is a vast improvement in both the audio and video department for “White Zombie”. There is no mistaken that this film is still 80+ years old but they really did a solid job of delivering this film in fine form.

The special features on this release are honestly a bit of a let down. The only real extra is a brand-new 2014 audio commentary by Gary Don Rhodes, author of “White Zombie”. This one covers similar ground to Frank Thompson’s track on the Kino Blu-ray release but this is still very interesting and informative. Especially since the film is just over an hour, I was willing to throw it on again right after the first viewing and give it a listen. Other than the commentary track, there is a “White Zombie Theatrical Reissue Trailer”. a bonus “Dracula (1931) Trailer” and a Photo and Poster Gallery included.