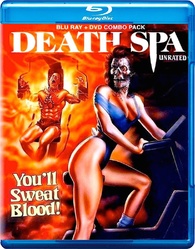 “Death Spa” is the first title to be release under the newly revived Gorgon Video label under MPI Home Video. If you are a fan of cheesy classic 80’s horror, you are going to want to support and check out this release for sure. This is the first time that this film has ever been released on high def Blu-ray as well in its uncut, unedited version. If you are looking for tons of graphic gore, unnecessary nudity and some good laughs that look no further than “Death Spa” for a great time. Plus seriously, can you turn down a tagline like “Welcome to the health club where you’ll sweat blood”?

Official Premise: The new fitness club in town has everything a health nut could ever want: a variety of workout machines, classes taught by friendly (and frisky) instructors, and a state-of-the-art computer control system for maximum client comfort. Unfortunately it s also possessed by the evil spirit of the owner s dead wife, and before long every dumbbell, leg press, and rowing machine becomes a deadly weapon for her to enact bloody vengeance on the club s beautiful members. So if you re looking for a real workout from hell, enter DEATH SPA a new exercise in terror!

“Death Spa” hits Blu-ray with a new 1080p transfer, which was created from a 2K scan of the original camera negative. The last time I saw this film was on VHS back in the 90’s, so this was a real treat personally. The colors are sharp and the print looks solid overall, not perfect but still impressive. The DTS-HD Master Audio 2.0 also does the trick for this title as well. It is a well-balanced surround track. MPI also released this film as a combo pack, so there is a Blu-ray and DVD included here.

In the special features department, there is some decent new content included here. There is a commentary track from Director Michael Fischa, Producer Jamie Beardsley and Editor Michael Kewley. They comment in the track that they each haven’t seen the film in 25 years. I feel that it makes up for an interesting track for sure. Next up is “An Exercise in Terror: The Making of Death Spa”, which is a solid 50 minute behind-the-scenes look at the film. There are interviews included from Jamie Beardsley, Michael Kewley, cinematographer Ace Armenaki, actors William Bumiller, Hank Cheyne, Shari Shattuck, Elizabeth Ziegler and more. Lastly there is a theatrical trailer included.