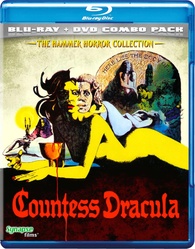 “Countess Dracula” is the latest film in The Hammer Horror Collection from Synapse Films. It stars the stunning Ingrid Pitt playing the role of real-life Hungarian Countess Elizabeth Bathory, a woman accused of torturing and murdering more than 600 virgin girls. This is considered one of Hammer’s more underrated films. This film has been double-billed on DVD in the past with two of my other favorites Hammer films including “The Vampire Lovers” and “Twins of Evil” but this it is making it’s Blu-ray debut here for the first time. I honestly do not think I have seen this film in the last 20 years and yet, it was still as effective as it was the first time. It looses some steam towards the end but overall, it is a great role of Pitt and another classic from Hammer.

Official Premise: The beautiful Ingrid Pitt (“The Wicker Man”) stars as Elisabeth Nádasdy, an aging Hungarian Countess who discovers she can reverse her aging by bathing in the blood of young women. While in her youthful state, the Countess falls for the handsome Lt. Imre Toth (Sandor Elès), and impersonates her own daughter to win his affections. Soon, girls in the village go missing… kidnapped and murdered by the Countess and her steward, Julie (Patience Collier) to satiate her horrifying bloodlust. Can Elisabeth live a life of deception with her grotesque lust for blood to stay eternally young, or will her ghoulish secret finally be revealed?

Synapse Films are usually a toss up in terms of Blu-ray presentation, this one is in the middle area. It is not perfect at all yet it is not terrible. Either way Ingrid is still amazing to look at in HD! The DTS-HD Master Audio Mono track works well with the original music score composed by Harry Robertson. The special features include an audio commentary track with Actress Ingrid Pitt, Director Peter Sasdy, Screenwriter Jeremy Paul And Author Jonathan Sothcott. There is a featurette called “Immortal Countess: The Cinematic Life Of Ingrid Pitt”, as well as a vintage audio interview with Ingrid Pitt. Besides that there is a Still Gallery and theatrical trailer included along with Synapse’s signature reversible cover artwork.