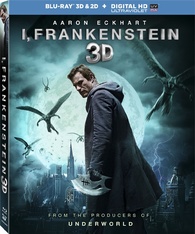 Man, I really wanted this film to kick ass. I thought the trailers actually looked pretty freaking awesome, despite bad reviews I saw. I am not ashamed to say that I have been a sucker for the “Underworld” series and this is from the same producers with a similar look and feel. The film suffers from a weak plot and terrible 3D, in fact some of the worse that I have seen since “G.I. Joe: Retaliation”. I also had to switch to the 2D version half way through. I loved the look and feel of the film though but I wish they put slightly less effort into the visual effects and more into the story.

Official Premise: The explosive thriller takes place 200 years after Dr. Frankenstein’s shocking creation came to life. Celestial forces name the creature Adam, and arm him with weapons to defeat the demons that are constantly seeking his destruction. However, soon Adam finds himself in the middle of a war over the fate of humanity and discovers that he also holds the key that could destroy humankind.

Lionsgate is releasing this film only in option with a Blu-ray 3D + Blu-ray + DVD + UltraViolet Digital Copy combo pack. If you don’t have 3D, the same disc can also be used in 2D and in fact, I would recommend it that way. Not that the film is any better but it is at least more watchable. The 1080p transfer is solid throughout and the visual effects are very impressive as well. I just wish that they would have polished this obviously post-production 3D dub more thoroughly.  The DTS-HD Master Audio 5.1 surround track is definitely a hit though and really works with the action scenes.

In terms of special features, I am afraid to say we are again slightly let down. There is a decent audio commentary track with Co-Writer/Director Stuart Beattie and also another with filmmakers Gary Lucchesi, Richard Wright, James McQuaid, and Kevin Grevioux. Really only recommend these if you dug the film, obviously. There is two featurettes on the special effects. The first is “Creating a Monster” and “Frankenstein’s Creatures”. Lastly, there is a theatrical trailer included.