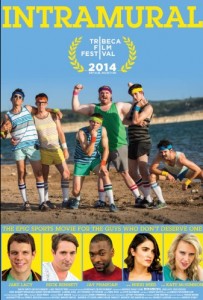 As in actual intramural leagues, there is basically nothing at stake in the film Intramural, Andrew Disney’s hilarious send up of the Inspirational Sports Movie. Not that this stops any of the players from being balls to the wall committed to the game. Complete with underdogs and training montage, Intramural is the sports movie full of characters who have watched their Mighty Ducks and their Karate Kids an unhealthy amount of times.

Caleb (Lacy) has turned his back on his flag football team after rival team the Titans paralyzed best friend and teammate, Grant (Nick Kocher) “from the balls down” as he made a game-winning play. Four years later, facing the LSATS and an accidental engagement to his crazed girlfriend (McKinnon), Caleb is drawn back to the game and the Titans are waiting to avenge their defeat.

Lacy is an amiable everyman lead but it’s when he reassembles the rest of the team that the movie really shines. As in every sports movie, the Panthers require an inspirational coach to whip them into shape. Fortunately, Kocher’s Grant returns to the fold now with a wheelchair and crotchety old man voice. He might be the same age as the players, but he’s got the soul of Rocky’s Paulie and a psychotic dedication to the sports movie formula. Kocher, of internet duo BriTANick, (partner Brian McElhaney here takes the role of illusionist player, Chance) plays Grant with such fevered conviction that you don’t doubt for one second that he’s seen every single installment of Air Bud. For better or worse.

Matching Kocher’s energy on the evil Titans side is Beck Bennett’s team captain, Dick Downs, a screaming man child to whom the game means everything. It’s as though he’s aware of his role in the sports movie universe but wholly oblivious to the fate of his character type.

Even with the predictable formula in place, Disney manages to find new laughs in how he pulls off the traditional sports movie tropes including a hugely crowd pleasing ‘magic’ play. Gifted with a cast of comedians who, like the Panthers, are giving their all. It’s a lot of yelling, a lot of dick jokes and a lot of fun.