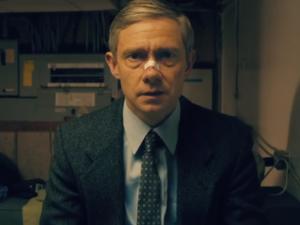 Martin Freeman is known best by some as Tim Canterbury in BBC’s “The Office”. Some know (and love) him from “Love Actually. He has also donned the hat of Dr. John Watson in BBC’s “Sherlock”. Or if none of those ring a bell, he is also in a (quite unknown, rather small) trilogy called “The Hobbit” where he plays a young Bilbo Baggins. Either way, Martin has had such a diverse and incredible career to date and though his latest role could also be his best. He is making his U.S. television debut with FX’s “Fargo” playing the role of Lester Nygaard”. The show is an adapation of the 1996 cult classic movie. Media Mikes had a chance to chat with Martin about the show, working with Billy Bob Thornton and his character.

Mike Gencarelli: What attracted you to the role of Lester Nygaard in FX’s “Fargo”
Martin Freeman: Well, just the fact that it’s well written. The script itself is well written, the whole thing, the whole first episode, which is what I based my decision on. It was a lovely episode. And with Lester I just got the feeling that this was going to be a role where you could give rein to a lot of stuff, to play a lot of stuff. Even within that first episode the range that he goes between is really interesting and so I knew that was only going to grow and expand in the next nine episodes and so it proved to be. In all the 10 episodes I get to play as Lester pretty much the whole gamut of human existence and human feeling. He does the whole lot and that’s exactly what you want to do as an actor. Noah [Hawley] treads that line very well between drama and comedy and the light and dark. I like playing that stuff.

MG: Talk to us about your character’s relationship with Billy Bob Thornton’s character in the show 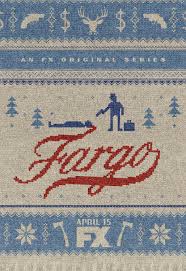 and how it developed over the 10 episodes?
MF: Well, yeah, again it was those initial scenes with Billy that really, really attracted me to doing the role because I thought they were just mesmeric. I really loved that it was like little doing plays, little two-handed plays. It develops without kind of saying too much and a lot off-screen. There are moments of on-screen development, but throughout the series it’s sporadic. But Lorne Malvo, I suppose, is a constant presence in Lester’s life because of the change that Lester has undergone as a result of meeting him. So, everything that Lester does, every way that he develops as a character, for good and bad, you could say is kind of down to that initial meeting with Lorne Malvo. So, there is a development. We don’t get as much screen time as I would like. I think we both really, really loved sharing actual space together and doing work together and we don’t get to do as much of that as we would want, but there is more to come.

MG: Did you do anything specific research about Minnesota or Minnesotans in preparation to play Lester?
MF: Not specifically, no. Ideally, what I would have wanted to do was spend some time there pre-filming because what I wanted to do was not, definitely not do a caricature and definitely not do something that was just comic or a way of going, oh, aren’t these people funny kind of thing. So, in an ideal world I would have spent a couple of weeks hanging out in bars or just speaking to people. The ideal world doesn’t exist and I wasn’t able to do that. But I worked very hard on the accent because, as I said, I didn’t want it to be like a comedy sketch. I wasn’t playing an accent. I was playing a character who happened to speak like that and to be from that place. So, not specific research. I listened to a lot of Minnesotans, put it that way. I listened to a lot of actual Minnesotans in an audio sense, I mean a visual sense. That’s why I didn’t really go back and watch the initial film with Fargo, love it as I do, because I wanted to, for my research of accent-wise, I wanted it to be actual Minnesotans and not actors playing Minnesotans. Any more than I would expect an actor who wants to play a Minnesotan should study me. They shouldn’t study me, they should study a Minnesotan. So, that was the kind of extent of my homework on that. So, rather than thinking what is it that makes Minnesotans different or specific or whatever, I think Lester is pretty universal. There are “Lesters” everywhere in every race and walk of life and country. There are people who are sort of downtrodden and people who are under confident and all that, so that was more a case of tapping into that in myself really. 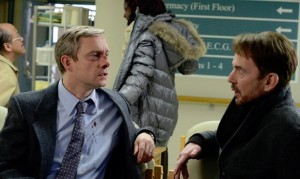 MG: You’re no stranger to shorter TV series formats, like “Sherlock”; so what did you enjoy most about having “Fargo” be a limited series of 10 episodes?
MF: Well, I think my general outlook on life is that things should be finite and things are finite. You know, we all die. Everything ends. And so for me the idea of things going on and on and on, I don’t always find very attractive. But if it’s a show that I love and it keeps going on and it retains its quality then I’m delighted to be a viewer of it. But I’ve never done things that have gone on and on. Again, like you say, “Sherlock” is a finite job. We spend a limited time of the year doing that. It’s not even every year. “The Office” was 14 episodes totally by design because precisely of what I’m talking about, the attitude of retaining quality and leaving people wanting more rather than leaving people wanting less. This 10 episodes was kind of a clincher for me. When my agent sent it to me it was with the understanding that she said, you know, “You don’t go out for American TV because you don’t want to sign on for something for six or seven years, but this is 10 episodes. See what you think”. So, that was a big attraction. And then I read it, of course, and thought, well, man, this is going to take up four or five months of my life rather than seven years and I’m in. I like moving on, I like going on to the next thing. I like having something else to look forward to as well. I do have a low boiling pressure. I just want to do other things. I think that’s basically why it is and I want to leave something, hopefully, leave something behind that people go, oh, that was great, as opposed to, oh, why did they carry on with this? It was good for the first three seasons and then it all went wrong. I’m well aware that some things don’t go wrong after three seasons. Some of my favorite things are fantastic for a long time. But, yeah, for me personally, I like the hit and run approach. I love doing this for a bit and then doing something else for a bit and then doing something else for a bit. That’s the way I’m hardwired I think.

MG: Lastly, was there anything about Lester that you added to this character that wasn’t originally scripted?
MF: I suppose, yeah, because I think there always is and I don’t even know what is specific, what I could answer to that. But my job I feel is to take a good script and somehow make it better. And that’ every department’s job. It’s the camera department and the design department, you know, to make this script, which is hopefully very good, to make it even better. So an actor’s job is to put flesh on the bones of the character because even though it’s fantastically written you don’t just see the script up on screen. You know, that would be quite boring if you just read the script. You have to flesh it out and just the physicality, the placement of the voice, yeah, I mean all of that stuff can only be done by an actor. Sp yes, the answer is I hope I would have brought a lot to it, but specifics, I don’t really know. But I mean everything that you see on screen, some of that’s Noah and some of it’s me.