Chef, the new film from Jon Favreau held its premiere on Tuesday in New York. The hugely successful director of “Iron Man” and “Elf” hasn’t directed an independent film since 2001’s “Made” and was excited to debut the comedy, which he also wrote and stars in, at the Tribeca Film Festival.

In the film, Favreau plays Carl Casper, a chef whose embarrassing confrontation with a food critic goes viral on the web causing him to lose his job at a successful restaurant and start from scratch with a food truck and a road trip with his son. Favreau spoke on the red carpet about the inspiration for this story: 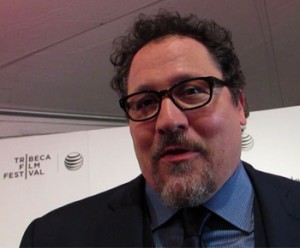 Favreau: “When you write something like this, you’re not really sure where it comes from. I wanted to write something about a chef and something about being a dad and this is the film that came out. And the fact that I’m at the point in my career where if I have an idea like this, I could get it made and have such great friends who would come together and be part of the cast so I found myself very fortunate.” 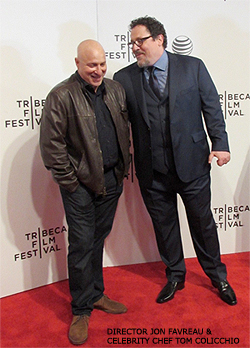 How was it working with Robert Downey Jr. without having him playing Iron Man?
Favreau: “I love working with Robert and it was great for him to be on my movie. Because on the Iron Man movies, I feel like I was really there to help support him and make the character look good and make the story make sense and you know, be there in a supportive role. Here, he came on board my movie to do whatever he could to elevate the film.”

As the story concerns a man frustrated working for a successful business while being artistically unfulfilled, I couldn’t help but wonder if coming off of studio films, the story was at all autobiographical, but Favreau maintains this isn’t the case:

Favreau: “No, I’ve been very lucky, I work on big movies and small movies and I really am very proud of all of them. As a matter of fact, I’m going to do “The Jungle Book” [for Disney] after this which is much bigger than “Chef” so unlike the character in the movie, I really like mixing it up a bit. I think the character I play is a little 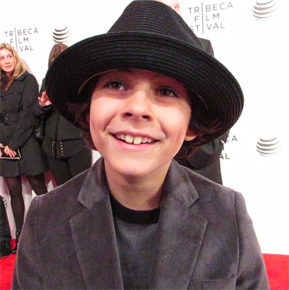 more confused with what drives him. But I really did have a good time doing a small movie like Chef which is similar to how he feels in the film.”

Favreau was joined on the carpet by his onscreen son, the talented, 10-year-old Emjay Anthony, who had nothing but good things to say about his veteran cast:

Anthony: “Sofia Vergara is just drop dead gorgeous, and [John Leguizamo’s] kind of a ladies’ man and so am I, so there was a little contest there. And then Jon Favreau is just such a great actor.”

As for any upcoming projects for the young Anthony, he told us not right now, but “I’m open for business if anybody wants me!”