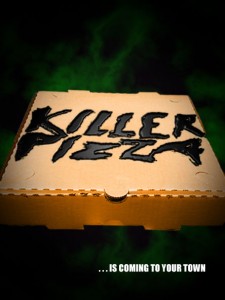 “Jimmy and Sam are two college graduates who return home and find themselves working at a small pizza shop that pops up out of nowhere. It doesn’t take long for them to suspect that they’re working for two cosmic freaks with more sinister intentions than simply delivering pie. What is happening at the Killer Pizza shop? What is behind their secret recipe?”

That is the synopsis of ‘Killer Pizza’, the definitive feature-length picture about growing up, getting jobs, and surviving a Killer Pizza monster invasion.

Today I sat down and talked with the creative team behind the film: co-writer/director Kai Winikka and co-writer/producer Erin Darley. Both filmmakers live in Lawrence, Kansas and are graduates of the University of Kansas.

B.C. Allen: How was it that you two first met?
Erin Darley: When I was a Freshman at K.U., Kai was one of the Presidents of Film Works.
Kai Winikka: I ran a Cult Movie Night, once every month during my Senior Year, through Film Works. Film Works was an extra-curricular for freshman whom weren’t able to get into some of the production classes. It was more of a student-driven organization. Erin was a cult-film enthusiast, and it was always a big thing to get girls to show up. I always made more of a point to reach out to Erin since she was really into it. I’d tell her, “Ya know, we’re showing ‘Breakin’’ and ‘Jaws 4’, you have to come: bring your friends!”
ED: It was just a bunch of nerds coalescing, keeping each other motivated.
KW: It was a group of dinguses getting together to make movies. 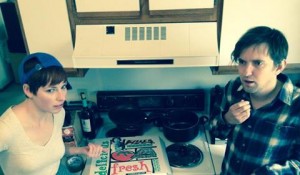 ED: Chicks with d*cks in chains.
KW: And there was an amulet that allowed her to shoot lasers out of her breast-icles.
ED: And then there was “Nanny Goat” which starred my sisters.
KW: And my basement in K.C.K.

BCA: What the origin of the idea for ‘Killer Pizza’?
KW: “Nanny Goat” was originally Plan A for the 48-Hour Film Festival, and if it didn’t work out, Plan B was “Killer Pizza”, but it was a lot sillier at the time. “Nanny Goat” did well and ended up winning the Audience Award. It was originally going to be about a babysitter, so naturally they order pizza; and of course the pizza ends up killing them.
ED: I always say that it goes back to standing there and deciding whether “Nanny Goat” was going to work and Kai just said, “If it doesn’t work out we’ll just order a pizza and we’ll throw it on your sisters and it will be eating them. And then at the end of the movie it crawls up to the camera, looks at the camera, and belches.”
KW: It’s come a long, long way from there. Although “Killer Pizza” is about a Killer Pizza and has Ron Jeremy in it, I’d like to say that this is a legit horror movie. It’s not campy at all.

BCA: You mention Ron Jeremy, how is it that he became attached to this project?
KW: I did a documentary in 2008 called “XXX in the Midwest” and Ron came to Washburn University in Topeka, Kansas to do a debate. So we waited in a long line afterward to meet him and he did the interview, had no issues, and signed the waiver like it was nothing. It left an impression, like he’s someone who is down for anything. He’s known as the hardest working man in show business, and he doesn’t say no, well, if it’s the right project.
ED: I came back from Colorado last year and Kai said that if I helped him write “Killer Pizza” then we’d get Ron Jeremy to be in it and we’ll put it on Kickstarter.com. So we wrote a part for him. And when we thought we were done with the script – which was three drafts ago – we knew it was time to contact Ron Jeremy. We sent him a letter, not knowing how long we’d have to wait to hear back from this guy. I went off to work, at a restaurant, and I was checking my e-mail obsessively, and he e-mailed us back within thirty minutes, and he said “Yes.” And I still have the letter, which started, “Dear Hedgehog,…” 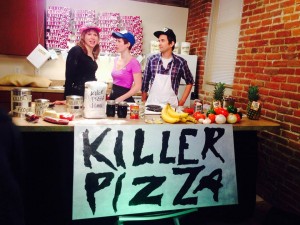 BCA: What would be the biggest hurdle for this production?
KW: The biggest challenge I think will be the effects, that’s what I anticipate it being. There are a lot of them and they are elaborate; and there is a lot of testing that has to go down beforehand. And they can still go wrong, like on set, the day of. Also making sure we can make our day and keep the production sailing.

BCA: What makes you want to use practical effects as opposed to digital effects?
KW: It has more charm. There is more heart to it. I am a big believer in visual effects when they are combined with practical, but this movie doesn’t really call for that.
ED: I think C.G. is trying to be realistic, but it doesn’t always work. Regular effects don’t always look super real, but the suspension of disbelief takes care of a lot of that for us; but it’s more fun, I would say.
KW: It’s the heart. C.G. comes close, but not close enough.

BCA: Do you have a specific look you are going for with this film?
KW: It’s going to be a really dark film, so the idea is to go in and bring the black way, way down, and taking a lot of the color out. That idea is really appealing to me. The look of the film “976-EVIL” is the kind of look I am going for.

BCA: When was it that you started to write, or realized you wanted to be storytellers or filmmakers?
KW: In high school, a group of guys and myself were making “Jackass”-type videos. We were doing it every week, and then every day; and it got to a point where I was telling them they’d have to do it again because it wasn’t good enough, and my friends told me I was taking all the fun out of it. It grew from there.
ED: I made high school movies, too. But I didn’t discover my writing ability until college. I’ve just always done it as a fun, personal thing. I write poetry, and short stories. Screenplays are great, but there’s no one who is going to tell you that screenplays are literature. They are great if you think in terms of images. Screenplays are awesome if you think of a great story; you can just bang out a series of images and dialogue and say “That’s done.” And if you want to you can go back to it and add the prose later.

BCA.: What is the endgame for “Killer Pizza” are there any specific festivals you are looking at?
KW: I think the best festival out there for this genre would be Fantastic Fest. And of course, show it locally at the Kansas City Film Festival.
ED: I defer to Kai on that. I want to see this movie, and that’s all I am thinking about. I figure I’ll just make this movie to watch it myself, and then take it from there.

Killer Pizza is a feature-length weird horror film to be shot Summer of 2014 in Lawrence, Kansas.
Kai and Erin are currently crowd-sourcing the funding for “Killer Pizza” with a Kickstarter campaign.