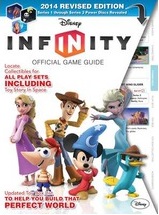 I have been playing “Disney Infinity” since the first game it was released and it is so much fun. But to be honest, I probably would have enjoyed it as much without reading the Disney Infinity: Prima Official Game Guide. The book was jam-packed with everything you need to know about the game. Well, since this game is ever-expanding it is only expected that the book should as well. Prima Games released an updated 2014 Revised Edition with over 175 new pages included. I was hesitant at first since I already owned the original guide but this one is a must own for anyone playing Disney Infinity, no question!

This book features easy-to-follow walkthroughs for all ages. Are you stuck on a specific puzzle, mission or quest? If so this book really lays it out for everyone to be able to follow and get the most out of the game. Since the release of the last book, Disney Infinity has released tons of new characters and play sets including “Toy Story in Space”. Included inside are exclusive maps cover every play set with detailed locations of hidden areas, items, and collectibles. If you are looking to max out your new characters like Jack Skellington, Phineas, Agent P, Sorcerer Mickey, Rapunzel, Anna & Elsa and many more you can find out how to unlock their powers and gadgets along with details on the entire power disc collection.

Most importantly if you are a fan of “Disney Infinity” then you enjoy to play in the Toy Box mode. You are able to learn how to build and customize your own virtual world with the detailed guide given on the variety of Disney characters, powers, gadgets and accessories. This new revised edition also comes with free mobile access to the eGuide. This will allow you access your guide from PC, Mac, tablet and smartphone devices etc. I found this really handy when I didn’t have the book right in front of me. So if you are playing “Disney Infinity”, I cannot recommend this guide from Prima Games anymore!