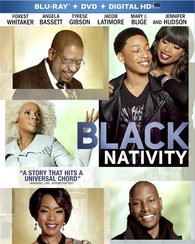 I am sucker for musicals, especially around the holiday season. “Black Nativity” got lost in a sea of films that came out late last Fall. The film posts a very impressive cast including Forest Whitaker, Angela Bassett, Tyrese Gibson, Jennifer Hudson and Mary J. Blige. I really enjoyed the gospel take of these traditional Christmas songs, but when the music stops the fun stops for me. I was literally yearning for the next song in order to make myself enjoy this film.

Official Premise: Struggling to pay the bills, single mom Naima (Jennifer Hudson) sends her teenage son Langston (Jacob Latimore) to live with his estranged grandparents, Reverend Cornell and Aretha Cobbs (Forest Whitaker and Angela Bassett) in New York City. At first Langston resents their strict household, but with the help of new friends — and a little divine intervention — he embarks on an inspirational journey of self-discovery that brings the whole family together.

I personally don’t understand why Fox chose to release this film in April especially due to its themes but I guess they just wanted to drop it out. They also tried to change the cover art to make it seem less holiday related but it fails in my opinion. The DTS-HD Master Audio 5.1 track really gets a nice work out through these gospel-infused classics. The only special features included on this release are some Blu-ray exclusive deleted scenes and promotional featurettes. Nothing special at all.