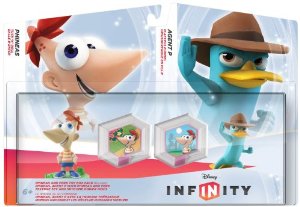 Disney Infinity is like the gift that just keeps on giving. The latest toy box pack released is “Phineas and Ferb”, even though it included Phineas and Agent P (while excluding Ferb). Personally, I would want Agent P anyway over Ferb (poor Ferb, you don’t talk much…you don’t get much love). The Disney Channel animated series has become so popular over the years. I remember about back around 2008, I was dying to find a Perry the Platypus plush doll and I couldn’t find anything anywhere. Now there is so much merchandise and this show is still going strong with over 200 episodes aired to date.

I play this game a lot and of course we all have our favorite characters to kick around the toy boxes with. Previously I have been having a blast with Sorcerer Mickey but I think Agent P might be taking the reign for sure. He is such a fun character and also has a pretty wicked flying fedora is in artillery. Phineas is no less cooler though. I can see tons of kids getting very creative with their toy boxes and taking on the persona of the character. Plus he also packs a very handy baseball blaster on him.

Along with these two toy box characters, this pack also included two wave 3 power discs. If you follow the game, you will realize that Wave 3 has not even been released yet, so this is a real treat as well. The first is “Tri-State Area Terrain” Texture set and the second is “Danville Sky” Skydome. The transformation of the toy box really looks spot on with the show’s aesthetic value. If you are a fan of the show you get to run around in these well know locations from the show.

I am not sure that this is the absolute final word but I have been following this game for a while and I have a feeling that this might be the last toy box set in series 2. I have been searching online and I have not heard any word about future characters, which means that Disney Interactive might be gearing up and holding out for “Disney Infinity 2”. Either way if you are looking for more ways to expand this amazing game, the Phineas and Ferb Toy Box Pack is a must have for any fan of the show.