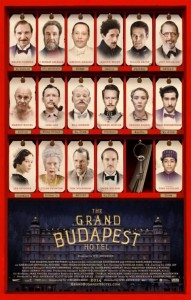 Though it may not look like much today, a half century ago there was no place finer than the Grand Budapest Hotel. We meet a young writer (Jude Law), who is researching the hotel for an upcoming book. As luck would have it, he is informed that the hotel’s owner, Mr. Moustafa (Abraham) is on the premises. A quiet man, Mr. Moustafa visits often and when he does, insists that he lodge in a small room in the employee quarters. Mr. Moustapha invites our young writer to join him for dinner and, over wine, tells him the story of the majestic hotel.

As the second World war rages across Europe, we are introduced to Mr. Gustave (Fiennes), the concierge of the Grand Budapest Hotel. Gustave is in charge of everything – from the flowers put out on the tables to what is served for dinner. When he’s not looking out for the needs of the guests, Gustave is looking out for the needs of the FEMALE guests, preferably the elderly ones. He gives them pleasure and, when they pass on to a better place, they give him a piece of their estate. As we meet Gustave he has just hired a young man (Revolori) to be the hotel’s newest Lobby Boy. Things go well until Gustave learns that one of his favorite guests (an unrecognizable Tilda Swinton, standing in for Angela Lansbury (!)) has passed on. He attends the reading of the will and learns that he has been left a very valuable painting. However, the late woman’s children, led by a wild eyed Adrien Brody, protest. Realizing his chances of getting the painting legally are probably slim and none, Gustave, with the assistance of his trusted Lobby Boy, steal the painting. And the adventures begin.

Wes Anderson has always found a way to create different worlds so perfectly that we, the audience, feel right at home in them. “The Grand Budapest Hotel” is no exception. Filled with fully fleshed out characters, amazing dialogue and a look that is right out of the 1940s, the film travels smoothly on the shoulders of Ralph Fiennes. Moviegoers who know him only as the sadistic Nazi officer of “Schindler’s List” or Lord Voldemort may be shocked when they see what a fine and natural comedian he is. He is joined by an all star cast that includes Edward Norton, Willem Dafoe, Jeff Goldblum, Harvey Keitel and long time collaborators Jason Schwartzman and Bill Murray. The script, by Anderson and Hugo Guiness and inspired by the works of author Stefan Zweig, is full of the humorous twists and turns that Anderson is well known for. The production design is outstanding, with attention to detail making the film a virtual picture postcard of the Continent.