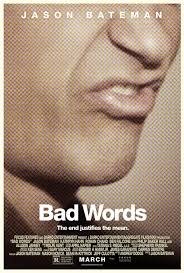 Guy Trilby (Bateman) is a man with a dream. That dream is to be named the best speller in America. And what better way to prove your skills than at the annual Golden Quill Spelling Bee? The only problem: Guy is 45 years old.

In a very strong directorial debut, Jason Bateman gives a change of pace performance as a spoiled man-child who will stop at nothing to achieve his goal. Finding a loophole in the rules, which states that no contestant can compete if they have graduated 8th grade, Bateman completely leaves behind the gentle “everyman” persona he’s made a career out of playing in everything from ”Arrested Development” to “Identity Thief.” Whether it’s convincing a fellow contestant that he’s just had sex with his mother or threatening to physically assault a girl contestant, Bateman adds a new “trick” to his overloaded bag of comic goodies.

Equally good is the supporting cast, headed up by eight year old Rohan Chand as a little boy who, despite his best intentions, ends up bonding with guy. That the boy and his father may be just as dastardly as Guy is one of the comic highlights of the film. Other strong supporting work is turned in by Kathryn Hahn as the reporter who sponsors Guy’s attempt, Allison Janey as the “Bee” overseer and the great Phillip Baker Hall as the long time educator who will stop at nothing to keep the spelling bee scandal free.

As a director, Bateman knows how to tell a story and, more importantly, how to pace the comedy so, when it’s at its best, it just flows smoothly across the screen. In a word, “Bad Words” is H-I-L-A-R-I-O-U-S!