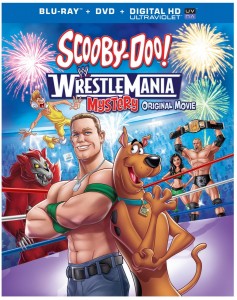 What happens when Warner Bros. Animation teams up with WWE Films? We get one of the best new Scooby Doo! feature length films to date with “Scooby-Doo! WrestleMania Mystery”. If you are a wrestling fan, I cannot recommend this anymore and if you are also a “Scooby Doo!” fan, this is a perfect match. This not only stars the Mystery Inc. gang but also is backed with some of the biggest WWE Superstars including John Cena, Triple H, Sin Cara, Brodus Clay, AJ Lee, The Miz, Santino, Kane and also WWE Chairman and CEO Vince McMahon. They not only are in the film in animated form but also lend their voices as well. WB has been behind continuously pushing “Scooby Doo!” and this just shows how much crossover this series has and how strong the brand is still.

Official Premise: When Shaggy and Scooby win tickets to WrestleMania, they convince the entire Mystery Inc. gang to travel to WWE City in the Mystery Machine to enjoy the show. But the trip quickly turns into another mystery as WWE City is full of secrets! A mysterious ghostly bear appears and threatens to ruin the show and steal the championship title belt. With the help of WWE Superstars John Cena, Triple H, Sin Cara, Brodus Clay, AJ Lee, The Miz, Santino Marella and Kane, Scooby-Doo and The Mystery Inc. gang team up to solve the case before it is too late!

Warner Bros is delivering “Scooby-Doo! WrestleMania Mystery” as a Blu-ray/DVD combo with a HD Digital Ultraviolet copy included. The 1080p transfer is very impressive. The animation style is vibrant and looks great. The DTS-HD Master Audio 5.1 tracks works perfectly with the mystery/action aspect of the film. In the special features department there is some decent extras. There is a brand new featurette “Behind-The-Scenes with Scooby-Doo and the WWE Gang”, which goes into the voice recording sessions with the cast of WWE. There is also a bonus episode of “A Pup Named Scooby Doo”, “Wrestle Maniacs”.

This is the first and definitely not the last collaboration between Warner Bros. Animation teams up with WWE Films. They are planning to mash-up another classic series “The Flintstones” in early 2015 bringing Fred, Barney and the whole Bedrock gang with stone age versions of WWE Superstars and Divas. So I am sure this is the beginning of a beautiful friendship I am sure. WWE Films has been getting some major steam behind them in the last few years and I can’t wait to see what they have planned next!