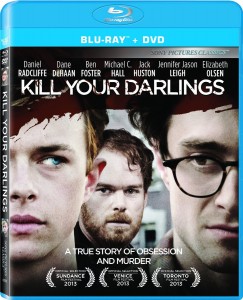 “Kill your Darlings” tells the true story of friendship, love and murder involving three of the greatest poets; Allen Ginsberg, Jack Kerouac and William S. Boroughs. I know Daniel Radcliffe lives under the shadow of the “Harry Potter” film franchise but he really shines in this film. As does Dane DeHaan (“The Amazing Spider-Man 2 & 3”), who is really taking off and is quickly becoming one of the hottest actors in the business. Ben Foster (“Lone Survivor”) also gives an amazing performance and steals his scenes easily. The rest of the support cast include Michael C. Hall (“Dexter”), Jack Huston (“Boardwalk Empire”), Jennifer Jason Leigh (“The Spectacular Now”) and Elizabeth Olsen (“Martha Marcy May Marlene”). These performances are all outstanding and really deserve attention.

Official Premise: When Allen Ginsberg (Daniel Radcliffe), is accepted at Columbia, he finds stuffy tradition clashing with daringly modern ideas and attitudes embodied by Lucien Carr (Dane DeHaan). Lucien is an object of fascination for shy, unsophisticated Allen, and soon he is drawn into Lucien’s hard-drinking, jazz-clubbing circle of friends, including William Burroughs (Ben Foster), the dissolute scion of a wealthy family, and David Kammerer (Michael C. Hall), an older hanger-on who clearly resents Allen’s position as Lucien’s new sidekick. A true story of friendship, love and murder, Kill Your Darlings recounts the pivotal year that changed Allen Ginsberg’s life forever and provided the spark for him to start his creative revolution.

Sony Pictures Classics delivered this film as a Blu-ray/DVD Combo Pack. I am a little disappointed that there is no Digital HD digital copy included though, which has become the norm recently. The special features included are worth checking out if you enjoyed the film. There is a featurette “On The Red Carpet”, which takes us to Toronto Film Festival with the cast. There is another featurette “In Coversation with Daniel Radcliffe and Dane DeHaan”, which chats with the leads. There is a great Q&A session with Director/Co-Writer Krokidas and Co-Writer Austin Bunn. The best though is definitely as well as the commentary track, which featuring Daniel Radcliffe, Dane DeHaan, John Krokidas and Austin Bunn. Lastly there are never-before-seen deleted scenes.