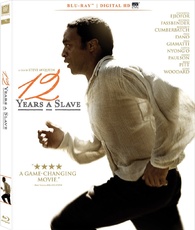 We had the privilege of  interviewing both Michael Fassbender and Paul Dano (click here) for “12 Years a Slave” last October during New York Film Fest. This was way before this film started drumming up all this critical rave. Along with Fassbender and Dano, this film is jam-packed with some amazing talent. Chiwetel Ejiofor and Lupita Nyong’o both give not good but absolutely phenomenal performances. Even other notable supporting roles include Brad Pitt, Paul Giamatti and Benedict Cumberbatch (who is one fire last year). This film just won numerous Academy Awards including the top award for Best Picture of the Year. I personally think “Gravity” was better but I see why this film took home the award. It is a must see if you missed it in theaters, no question. I must warn you though, it is quite an emotional ride and will definitely leave you exhausted until the credit hit.

Official Premise: Based on an incredible true story of one man’s fight for survival and freedom. In the pre-Civil War United States, Solomon Northup (Ejiofor), a free black man from upstate New York, is abducted and sold into slavery. Facing cruelty (personified by a malevolent slave owner, portrayed by Michael Fassbender), as well as unexpected kindnesses, Solomon struggles not only to stay alive, but to retain his dignity. In the twelfth year of his unforgettable odyssey, Solomon’s chance meeting with a Canadian abolitionist (Pitt) will forever alter his life.

20th Century Fox is releasing this film two days after it cleaned up at the Oscars with a nice combo pack including a Blu-ray + Digital HD UltraViolet copy. “12 Years a Slave” comes wiht a gorgeous 1080p transfer presented with an aspect ratio of 2.40:1. Director Steve McQueen really had a vision with this film and cinematographer Sean Bobbitt really nailed it. Some of the shots were so beautiful, I actually had to go back just to re-watch. The DTS-HD Master Audio 5.1 track works so well with the dialogue and, of course, Hans Zimmer’s beautiful score. This was no question of the best scores of 2013.

In the special features department, I was expecting a little more from the “Best Picture” of the year. I would have loved to see a commentary track included for this film, especially with all the talent that was involved with it. “12 Years a Slave: A Historical Portrait” is a really solid set of behind-the-scene featurettes. It includes Chiwetel Ejiofor reading from Northup’s original book, as well as a various interviews with cast and crew. The next two featurettes are quite short. “The Team” is a brief look which profiles the cast and crew. “The Score”, obviously, takes a look into Hans Zimmer’s music for the film. Lastly there is a theatrical trailer included.