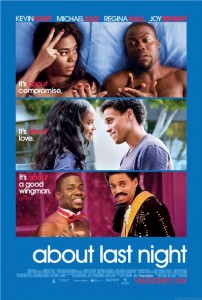 If you have any fond memories of the 1986 film “About Last Night…” I urge you to go read the “Robocop” review also available on this site. If not…

Danny (Ealy) and Bernie (Hart) are best friends. Upwardly mobile, fairly successful and in their early 30s, their lives revolve around their jobs and their favorite bar, where they spend their time trying to pick up new ladies. Well, Bernie does. Danny is in a funk since his last girl dumped him. Tonight Bernie has met Joan (Hall) and soon the two of them are back at Bernie’s place frantically doing what Jerry Reed called in “Smokey and the Bandit” ‘he-ing and she-ing.” A few evenings later Joan introduces Danny to her roommate, Debbie (Joy Bryant). The two start off talking quietly but end up back at Danny’s place. The End. Actually there’s another 80 minutes or so left of the film but if you’re still reading I’ll keep writing.

A remake in name only, “About Last Night” is a poorly directed series of Kevin Hart skits with an occasional emotional moment somehow finding its way onto the screen. As much as I like Kevin Hart in small doses, like when he shows up on “Modern Family,” as a featured player in a movie he seems to play the same person: Chris Tucker. His motor-mouthed, high pitched performance is so reminiscent of Tucker that I kept waiting for him to yell, “can you understand the words that are coming out of my mouth?” Hall keeps up with him, shrill word for shrill word. On the other side of the coin you have Ealy and Bryant. They both do their best to keep the film grounded in some sort of reality but eventually seem to give up, as if knowing it would be a thankless task. The best parts of the film are when Debbie moves in with Danny…the two of them learning to understand the commitment they’ve made, even when it seems impossible. It’s in these scenes that a little love is paid to the 1986 film (that and a short clip on television). Otherwise, the entire dynamic of the original film (Bernie and Joan HATE each other from the start. It is this dislike that keeps Danny and Debbie cautious) is totally ignored.

Instead of trying to tell a story it seems like director Pink just pointed his camera and filmed until the actors stopped talking. There is no pacing. No rhythm. You never get in a storytelling groove that might allow you to care for some of these characters. If there is anything positive at all about this film it is the performances of Ealy and Bryant.