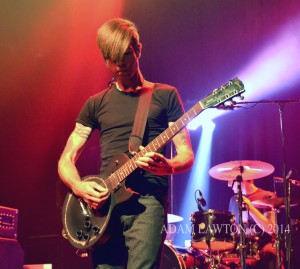 AFI played the final show of the “Burials” winter tour on February 1st at the intimate Town Ballroom in Buffalo, NY to a near capacity crowd. The California based band has been out in support of their 9th studio album titled “Burials” which was released in late fall of 2013.  Though it’s been 4 years since the bands last album and quite some time since the band has performed in the upstate NY area they certainly made up for lost time with the evenings stellar performance.

Kicking of the night was a 3 piece band by the name of “Coming”. The groups sound could be describes as a mixture of Reagan Era punk rock with a bit more edginess and experimentation. Though the idea was promising the group seemed to lack any real talent. Drums dominated a good portion of the band’s sound and what space was left was filled buy one line vocal passages screamed well past the point of be able to be recognized just what the singer was actually trying to sing. Though the venue was only partially full by the end of the groups set those in attendance did provide the band with ample applause. As the venue slowly began to reach capacity a two piece Industrial EDM group by the name of “Youth Code” would take the stage and by the end of the group’s first song you could almost hear a pin drop as the crowd, myself included were left completely baffled by what we were seeing and hearing. Unoriginal 80’s era beats mixed with schizophrenic yelling and behavior plagued the groups 30/40 minute set that when the duo finally left the stage it was if a collective sigh was heard throughout the room.

After a sizeable gap between acts AFI would finally take the stage basked in a glow of red, purple 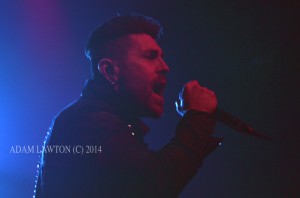 and blue lighting. Lead vocalist Davey Havok wasted no time acquainting himself with the audience as by the bands second song he had already made one trip in to the audience via a quick leap from the security barrier. This would not be the first time Havok would make his way out into the three tiered venue which only added to the excitement which filled the now tightly filled room. The band performed songs from their varying catalog which dates back to 1995. The band known for their energetic live performances certainly didn’t disappoint as bassist Hunter Burgan and guitarist Jade Puget made tracks all over the stage jumping and spinning throughout the 17 song set. Even though it was the bands last night of this tour run they gave the crowd something special by performing the song “Greater Than 84” live for the first time which sounded just as good, if not better than the recorded version. Before finally leaving the stage for the night the band performed a 3 song encore made up of “The Conductor”, “Dancing Through Sunday” and “Silver and Cold” which left fans cheering for more. Every time I am able to see AFI it makes me wish that they toured more extensively and this night’s show has once again left me with that same feeling.