AnnaLynne McCord is known best for her role in the CW series “90210”, playing the role of Naomi Clark. She is also known for the role of Eden Lord on the FX series “Nip/Tuck”. Last year she delivered a fantastic role in the terribly disturbing horror film “Excision”. This year, she returns to the horror/thriller genre again with the film “Scorned”, which co-stars Billy Zane. Media Mikes had a chance to chat with AnnaLynne about her roles and what we can expect from her in TNT’s “Dallas” this season.

Mike Gencarelli: After “Excision” last year and now “Scorned”, what do you enjoy most about playing these kinds of twisted characters?
AnnaLynne McCord: Doing “Excision” was a dream role for me. It was incredible in its own right. So when “Scorned” came down the pipeline and it sounded like a similar character but it had more of that campy Friday-night-fun-horror deal to it. It was one of those films that we didn’t think it was going to come together until the 11th hour. Literally, I was doing a film in Vegas and I was heading to the airport not knowing if I was going back to LA or heading to Ohio. When I got to Ohio, I was shocked at how much of a small town it was. I was wondering if I flew had overseas since there was no cell reception in the entire town. I had to drive over the bridge, which literally brought me into Kentucky in order to get service. Who can be without their cellphone these days, it’s terrifying. We need to make a horror movie about that [laughs].But it was a very fun film to 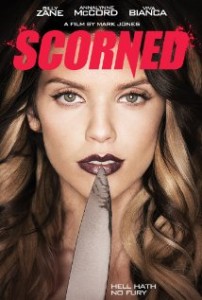 shoot and we kept it light.

MG: The film is quite brutal; was it difficult performing the torture scenes?
AM: When we really went there with some of these scenes, I learned the difference between filming and reality. Even when I saw the first screener, when I go to hobble Billy’s ankle, it was crazy thinking that I did that. I know I hit a log underneath his foot. I know I didn’t actually hit him but watching it was tough. It was still fun though. The cool thing about being a crazy sadistic character is that you get to be a nice person in real life. I get all of my anger out on other people…and I get paid for it [laughs].

MG: How do you get inside of the head of characters like Sadie?
AM: It is a very interesting transition for me. Obviously, I don’t do around torturing or murdering people otherwise you would be talking to me from a prison cell right now [laughs]. So there is a bit of embellishment. The key for playing any role is you have to decide for yourself before the project begins that you have absolutely no judgment over that character. That way you are able to look back and understand their psyche. As an actor you have to put on their shoes and have full acceptance of what they are doing and think “If I was her, why does my entire environment depend on me doing this”. It is interesting to think about a character who is doing something that is evil and have to look at them with empathy and compassion in order to get inside of them and be who they are. So that is really the process for actors, if they are good actors [laughs], to prepare when playing a role like Sadie.

MG: What drew you to work on the TV show “Dallas”?
AM: I think it has to be the storytelling. I know one of the showrunners, Mike Robin, from my work on “Nip/Tuck”. He called and link up again for “Dallas”. The showrunners sat down with me and explained the arc for the character and told me that their focus on the show was to tell stories. They wanted to have real genuine storytelling. For me, I thought it was so nice to hear. It was a nice transition for me as well between films and getting to tip-toe back into TV. I really loved that the fact that writers were so committed to have great storytelling.

MG: What can we expect from your character Heather this season?
AM: It was cool because for once I get to play a nice girl. She is a strong female role. The dynamics between her character and Christopher is really fun. She comes on strong like a tornado and hurricane all wrapped into one. So her energy is definitely a force to be reckoned with. I think that that dynamic is something that Christopher really likes about her. He is in this family that lies to everyone all the time and he has this one “creature” that comes in saying [in Southern accent] “I am going to tell you so much of the truth; you won’t be able to handle it”. He finds a way to handle it and it really becomes this great dynamic. I just finished wrapping up the season with episode 10, so it has been great. I can’t wait for everyone to see it.