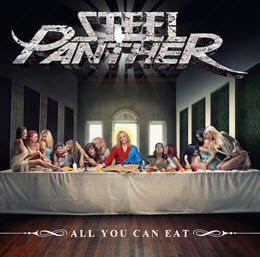 Pre-order All You Can Eat online January 14th

(January 13th, 2014 – New York, NY) The Sunset Strip’s hottest export, Steel Panther, is back and ready to unleash their third full-length album, All You Can Eat, on the world. The 12-track masterpiece is slated to hit stands April 1st in the United States on Open E Records via Kobalt Label Services (KLS). The album will be available for pre-order on January 14th at http://www.steelpantherrocks.com. From the opening acoustic riff of album opener “Pussywhipped” to final chord hit in the album closer “She’s On The Rag,” it is clear Steel Panther is back and better than ever. Songs like “Gloryhole,” “Gangbang At The Old Folks Home” and “BVS” all showcase Steel Panther’s incredible musicianship and ability to write memorable and sometimes educational songs. The band, comprised of Michael Starr on vocals, Satchel on guitar, Lexxi Foxx on bass and Stix Zadinia on drums, have made a name for themselves as one of the most entertaining acts out today. The debut single “Party Like Tomorrow Is The End Of The World,” was released in November with a star-studded video directed by Rob Riggle that has been viewed over 660,000 times. The explicit video for the song can be seen at http://smarturl.it/sppartyvd. Longtime Steel Panther producer Jay Ruston produced All You Can Eat.

The track listing for All You Can Eat is:

Steel Panther has also partnered up with acclaimed LA food truck Grill ‘Em All for a promotion to coincide with the announcement of the release date of All You Can Eat. Grill ‘Em All was the winner of the first season of the Great American Food Truck on the Food Network and is known for their heavy metal themed burgers. The band unveiled the album cover of All You Can Eat on the Grill ‘Em All truck and the truck will roam around Los Angeles giving away “The Fat Girl” and the “Eatin’ Ain’t Cheatin’ Cheeseburger” for free to all Steel Panther fans in Los Angeles. Here is the schedule for the locations of Grill ‘Em All today:

Steel Panther was, for a long time, rock’s best-kept secret: a cult legend on the LA scene. But in recent years due to the success of their albums (both debuted at #1 on the Billboard Comedy Album Charts), and live shows, the band has enjoyed huge acclaim from fans and peers alike. Steel Panther has been joined on stage by rock and roll icons such as Steven Tyler of Aerosmith, Paul Stanley of KISS, Corey Taylor of Slipknot, Tom Morello of Rage Against The Machine/Audioslave, Chester Bennington of Linkin Park and Green Day to name a few. Steel Panther has also been seen on Dancing With The Stars, Bad Girl’s Club and most recently in a national web campaign for Warner Brothers Pictures hit film, Rock Of Ages.