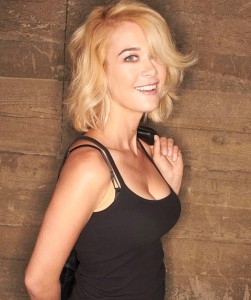 Michal Sinnott has appeared on several television series such as “Law & Order: Criminal Intent” and “One Life to Live”. Michal’s most recent role is that of Tracey De Santa in the super successful video game “Grand Theft Auto V”. Media Mikes had the chance to speak with Michal recently about what it was like working on the project and about her role in the upcoming independent film “Horror Con”.

Adam Lawton: What was it that interested you in becoming an actress?
Michal Sinnott: My mother has her Master’s Degree in theater. When I was really little she brought me to one of her auditions. We both ended up getting a role in the play as the mother and daughter. That was my initial introduction to acting. I think my mother had tried before this when I was really young however I was just too shy. I am originally from Virginia which is a right to work state. You can work on both union and non-union jobs there so I started working on locally based projects and projects that were coming to Virginia to shoot. I ended up going to a performing arts high school even though acting was something I wasn’t sure I was going to want to do. Growing up in a single parent home I knew the reality of things very early on as to how hard of a struggle this type of career could be. I didn’t want to have to struggle so I was determined to get a “real job”. My senior year of high school I had to write a play for a class which I then submitted to a festival in Richmond, VA. The play ended up winning and I got to go to this 3 week conference where my play was put on in this huge theater. That experience was so phenomenal and it really opened my eyes to things. While I was sitting in that theater watching my play I said that I would do this and I have just never looked back.

AL: How did you first become involved with “Grand Theft Auto V”?
MS: This audition was just like any other for actors. You get the call the night before and the next day you are in an office reading for a part. You end up just throwing yourself in to it. A lot of things are often shrouded in secrecy so generally you don’t even know what you are really reading for. The thing with “Grand Theft Auto” is that they have such a dedicated fan base that people are constantly looking for hints and clues about what could be coming out. Things were kept as anonymous as possible. 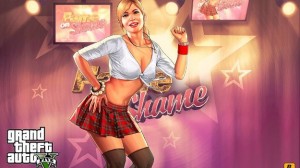 AL: Were you allowed to experiment with the character or were you asked to stay more to the script?
MS: There was certainly room for improvisation. I think that’s something I have found in most situations I have been in. There generally is always a little bit of wiggle room. If you are working on a play then things are more to the script same as if you are on a set and the director is directing their own words. When the director is working in more of a collaborative type setting then there is usually that room to improv. Tracey is such an awful character so to be able to explore that and be able to say things you would never say in real life was pretty interesting.

AL: Prior to your work on “Grand Theft Auto V” had you been interested in voice/performance capture acting?
MS: Yes. I have a strong background in voice over acting as I started doing that when I was still growing up. I have done commercials for places like Dunkin Donuts and McDonalds. This was actually my second time working on a video game however this experience was a bit different.

AL: Were you familiar before-hand with the popularity of the game franchise?
MS: Not entirely. I am not a gamer so I didn’t really know. I also didn’t really know I was working on “Grand Theft Auto V” for quite a while. I knew I was working on something for Rock Star but that was about it. (Laughs) I didn’t really see the full magnitude of the project as it was happening. Even back when I auditioned for the part I had no idea that it was a project I would be working on for 3 years. Nothing has prepared me for how big this has become. It is astounding! I feel like the lucky girl who won the lottery. It started out as this random audition that I had no idea about where it would take me.

AL: Did you find it hard in any way working on the project for so long?
MS: Tracey is not the most nuance character. There were times where I would go a couple months without working on the character and when the time came to start working again I was able to jump right back in to the role. I established the attributes of the character very early on and when you get back on set after a break it all sort of just comes back. Working on the project for so long gave me time to explore all the variables with the role. That is something that you don’t always get to do with other roles that aren’t as long.

AL: What do you feel was your favorite part of the process?
MS: I really liked working with the same group of people for so long. All of the tech people who made this happen were just great. To get to see them every day was just great. We became this sort of family. I developed this sense of familiarity which was really nice.

AL: Can you tell us about some of your other current projects?
MS: I did a couple independent films which are making their way around the circuit. One is called “Every Drop Counts” which is a film that was shot entirely live at a horror film convention. I play a roller derby girl who is this sort of weepy lesbian. She is just always falling apart. I think I cried in every scene. (Laughs) I am also producing on a Bio-pic film about Rick James. This is a really interesting project that I am excited to be working on.