You may not know the name Matthew Patrick Davis yet but he is making a name for himself very quickly. He recently made headlines when his stage version of “Jack’s Lament” for “Tim Burton’s The Nightmare Before Christmas” showed up on online. He has also been behind some very funny stage productions with the UCB Theatre including “The Shining! The Musical!” and “Jurasic Park: The Musical!”. Media Mikes had a chance to chat with Matthew about his work and what he has planned next.

Mike Gencarelli: Let’s talk about your stage version of “Jack’s Lament” for Tim Burton’s “The Nightmare Before Christmas”? Have you been contacted at all or do you have plans to expand it?
Matthew Patrick Davis: As a 6’8” physical actor who grew up loving Tim Burton, Danny Elfman and Oingo Boingo, playing Jack in a live adaptation of “The Nightmare Before Christmas” has always been a dream of mine. A couple years ago, I put up a few scenes from “Nightmare” in my acting class. The class freaked out and got super excited about it, so that’s when we decided to shoot some of it, and that’s where the video comes from. If this video could accomplish anything, I guess it would be for it to be a viral thingy and get the attention of the people that own the rights and actually have the power to make it a legitimate piece of theatre: Tim Burton and Thomas Schumacher, the President of Disney Theatrical Group. It would obviously have such mass appeal, and I think could be something insanely great.

MG: Tell us how did you come up with the ideas for “The Shining! The Musical!” and “Jurassic Park: The Musical?”
MPD: I write the movie musicals with my friends Joe Chandler and Zach Paez; friends from high school who are now television writers in Los Angeles. We just pick movies that we love, and musicalize them into part parody, part tribute. “Jurassic Park” was a movie that was very formative in our youth; as 14 year olds, we would often be found 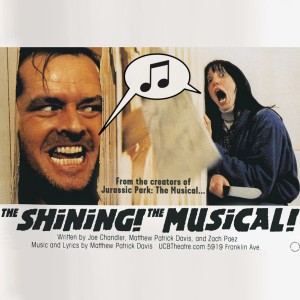 doing impressions of the Raptors or the Spitter in a Denny’s parking lot somewhere. “The Shining” is another one of our favorite films — we just enjoyed the juxtaposition between the darkness of man slowly going insane and trying to murder his family, with the light-heartedness of a musical.

MG: Any plans to ever perform these again or record and release them?
MPD: We perform the movie musicals semi-regularly at the Upright Citizens Brigade Theatre in Los Angeles, so there will definitely be another performance sometime in the future.

MG: What do you have planned next to turn into a musical?
MPD: We’ve done four movie adaptations, (JP, The Shining, The NeverEnding Story, and The King of Kong) so next, we would love to do an original. So we’ll do that, and/or do one of the movies we’ve always talked about doing, i.e. T2, Top Gun, Glengarry Glen Ross, Braveheart, The Sixth Sense, etc.

MG: How did you end up as the Sprint Zombie for their commercials?
MPD: It was a pretty standard commercial audition process, just like any other. I got lucky with this one, in that they ran it so much, and it was actually a funny spot that I was really pleased with. The director said that one the reasons they hired me was because they like the 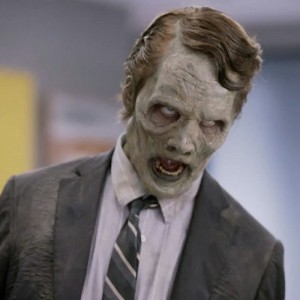 way I added the “cool, cool cool cool…” in the audition, so I guess that’s something.

MG: What else do you have planned for 2014?
MPD: I’m going to be releasing an album of some of my songs that can be found on my YouTube page. I’ll be writing more songs and musicals. I’m hoping to take my one man show to the Upright Citizens Brigade Theatre in NYC — it’s called, “Matt Davis Gets A Girlfriend:” A One Man Musical about One Man’s quest to not DIE ALONE. Also, I’ll be doing the revival/reboot of the musical Side Show at the Kennedy Center in DC in June and July, having just done it at the La Jolla Playhouse.