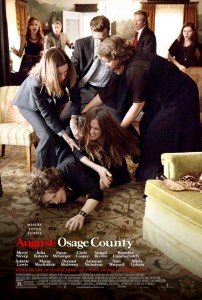 Hollywood is full of movies about pushy and/or overbearing mothers. From Mother Bates in “Psycho” to Mama Rose in “Gypsy” to Margaret White in “Carrie” (the original 1976 version), we’ve seen how they manipulate and mold their children through fear and threats. To that short list add Violet Weston (Streep). When Violet’s author-husband Beverly (Sam Shepard) goes missing, their three daughters return to the family homestead. Oldest daughter Barbara (Roberts) brings along her husband, Bill (McGregor) but doesn’t tell her family that they are currently separated. Middle daughter Ivy (Julianne Nicholson) has a new beau but if afraid to spill the beans. And youngest, free-spirited Karen (Juliette Lewis)….well, she’s young and free-spirited. As is her fiancée, Steve (Dermot Mulroney), who sadly has eyes for Barbara’s too old for her own good 14 year old daughter, Jean (Abigail Breslin). With all of these personalities in one house you know the fireworks can’t be too far behind.

Based on the Tony Award and Pulitzer Prize winning play by Tracy Letts, “August: Osage County” could best be categorized as a class in Acting 101. Led by the magnificent Streep, the film takes a grounded play that ran for three and a half hours and compresses it into a two hour showcase of talent. It is during those two hours that stories are told and secrets are revealed.

What can I say about Meryl Streep that hasn’t been said elsewhere? The most honored actress in film history, she adds another jewel to her crown here. Violet is loud and vulgar, with a smart aleck comment always at the ready. “Are you supposed to be smoking,” she’s asked early in the film. “Is anybody SUPPOSED to be smoking,” she retorts. Unbeknownst to Violet, Barbara has learned to give as good as she gets and the verbal battles between Streep and Roberts are better than fireworks on the fourth of July. To be honest, there isn’t a bad performance in the lot, but I’d be remiss not to give credit to Nicholson and Margo Martindale, who manage to shine in front of this all star assembly.

If there is a problem with the film it’s because of its running time. You can almost sense that there are some things not told, but when the story begins to run over three hour longs you have to cut when you can. Director Wells does open the show up some, but the words and situations are all Letts, who also scored a cult hit last year with the film version of another one of his plays, “Killer Joe.”