Fabio Lanzoni or better know as just Fabio, is an Italian model, spokesperson, and actor. He has a very fun cameo in the new film “Dumbbells” playing himself. He also is working on a new supplement product called Healthy Planet Vitamins. Media Mikes had a chance to chat with Fabio about this film and his product.

Mike Gencarelli: Tell us about your relationship with Hoyt Richards (who co-wrote the film and plays Jack Guy)?
Fabio: I have known Hoyt for a long time. We started modeling together back in the 80’s while working for Ford. We used to go on talk shows together and represent Ford Modeling Agency and due to that we became good friends. At that time Hoyt was involved with a cult. They believed the end of the world was coming. He was giving every single penny he had to this cult. I always told him that these people were taking him for a ride but he was very into it and didn’t listen to me. They took everything from this guy and left him with nothing. So he ended up staying with me for about a year and a half after since he was left broke. I ga 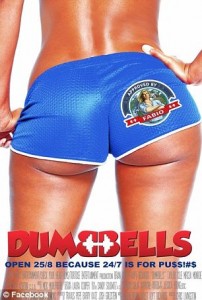 ve him a car and really helped him out. He is a real good friend of mine and such a great guy and I would do anything for him.

MG: How did you get involved with this film “Dumbbells”?
Fabio: He asked me if I wanted to be involved with his movie and, of course, I said “Definitely, I want to do it”. At the same time, my sister was battling with cancer and my time was limited. I cancelled all of my jobs prior just to be with her. She unfortunately ended up passing away six months later. He would have loved me to be more involved with the film but it was just bad timing then. It is a funny movie and Hoyt did a really great job with it.

MG: There is a line in the film “Fabio’s kind of a dick huh?”; how was it playing yourself with that angle mixed in?
Fabio: In the beginning, Hoyt originally wanted to do a movie about his life. I think it would have been amazing but is more drama than comedy. After though, he decided to put that chapter of his life behind and just make fun of it. So we just played around with the film and just had fun. I liked playing fun on myself but I get to save him in the end, so I redeem myself.

MG: Tell us about the highway billboard for “Dumbbells” pushing “For Your Consideration: Best Actor”?
Fabio: Yeah! That’s funny right? They asked me about that and I thought it would be fun for them to put up this billboard. I figured why not. I think it is very effective though and it gets people interested in the film. 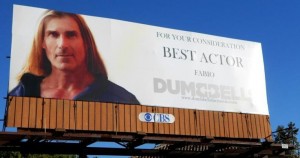 MG: Besides acting, tell us about your work with Healthy Planet Vitamins?
Fabio: It is a great supplement product, which is currently available in Whole Foods Market and other stores. It is also available through the website, http://healthyplanetnutrition.com/. It consists of the highest quality of protein available. People may not know but every single cell of your body regenerates due to protein. This has been proven. The highest quality protein in nature is whey. The only problem is that the quality of whey in the U.S. is not good and in fact not even real whey. I came out with a line with real biologically active whey. The only place you can get this is from New Zealand, since they do not use pesticide and fertilizers. The results have been unbelievable that people have been getting. The problem is that companies today cut corners for profits. I didn’t want to cut corners, I wanted to give the people the best quality protein there is and I believe I have achieved that.