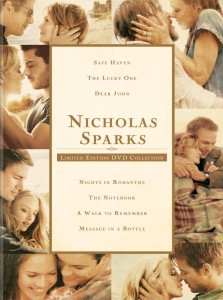 Attentions all husbands, boyfriends and guys all around – Valentine’s Day is right around the corner and let me guess you do not have a gift yet? Well you can thank Warner Bros because they are releasing the Nicholas Sparks Limited Edition DVD Collection. This is the first time that these films are available in one collection, The seven films includes, which are based on the best-selling author’s novels, include “Safe Haven”, “The Lucky One”, “Dear John”, “Nights in Rodanthe”, “A Walk to Remember”, “Message in a Bottle” and “The Notebook”. Along included there is also a special postcard set with images from each film and a letter from Nicholas Sparks.  A must own for any fan of Sparks!

Nicholas Sparks is one successful author.  All of his novels have been New York Times bestsellers, published in more than 50 languages, with more than 90 million copies in print worldwide. Being with my wife for 15 years, I have seen my fair share of his film. I have never read his books though, so I have no comparison there. I enjoyed “Safe Haven” because I love Julianne Hough and what woman doesn’t love Josh Duhamel. Personally “The Lucky One” is a pass, sorry Zac Efron. “Dear John” is great and I love the chemistry between Channing Tatum and Amanda Seyfried.  “Nights in Rodanthe” was decent. Richard Gere is still one sexy man. “A Walk to Remember” is probably my second least favorite. Lastly both “Message in a Bottle” and “The Notebook” are classics and must watches when it comes to chick flicks.

“Safe Haven” (2013) Official Premise: When a mysterious young woman (Julianne Hough, Rock of Ages) arrives in Southport, her reluctance to join the tight-knit community raises questions about her past. Slowly, she begins putting down roots and gains the courage to start a relationship with Alex (Josh Duhamel, Transformers franchise), a widowed store owner with two young children. But dark secrets intrude on her new life with such terror that she is forced to rediscover the meaning of sacrifice and finds she must rely on the power of love.

“”The Lucky One” (2012) Official Premise: Zac Efron (17 Again) stars with Taylor Schilling (TV’s “Orange is the New Black”) and Blythe Danner (Meet the Parents franchise) in this romantic drama directed by Academy Award®-nominated writer/director Scott Hicks (Shine, 1996). U.S. Marine Sergeant Logan Thibault (Efron) returns from his third tour of duty in Iraq with the one thing he credits for keeping him alive — a photograph he found of a woman he doesn’t even know. Learning her name is Beth (Schilling) and where she lives, he shows up at her door, and ends up taking a job at her family-run local kennel. Despite her initial mistrust and the complications in her life, a romance develops between them, giving Logan hope that Beth could be much more than his good luck charm.

“Dear John” (2010) Official Premise: Directed by Lasse Halström, Dear John tells the story of John Tyree (Channing Tatum, Magic Mike), a young soldier home on leave, and Savannah Curtis (Amanda Seyfried, Les Miserables), the idealistic college student he falls in love with during her spring vacation. Over the next seven tumultuous years, the couple is separated by John’s increasingly dangerous deployments. While meeting only sporadically, they stay in touch by sending a stream of love letters which eventually triggers fateful consequences.

“Nights in Rodanthe” (2008) Official Premise:  This rich tale of hearts awakening stars Richard Gere (Arbitrage) and Diane Lane (Secretariat). Gere is Paul, a surgeon who long ago unwittingly traded family for career. Lane is Adrienne, a devoted mother trying to move on after her husband’s infidelity and struggling with his desire to return to their marriage. At a remote inn on the Outer Banks, both separately expect to do some serious soul-searching. But an approaching storm forces each to turn to the other for strength, setting the stage for a life-resonating romance.

“The Notebook” (2004) Official Premise: The Notebook is a story of lost chances, growing up, and the power of enduring love. Spanning six decades, the romantic story focuses on two teenagers from opposite sides of the tracks (Ryan Gosling and Rachel McAdams) who fall in love during one summer but are tragically forced apart. When they reunite seven years later, their passionate romance is rekindled, forcing one of them to choose between true love and class order.

“Message in a Bottle” (1999) Official Premise: In this tale of love lost and found, grieving widower Garret Blake (Kevin Costner, Dances with Wolves) may know how to build boats, but cannot rebuild his life. Theresa (Robin Wright, TV’s “House of Cards”), a lonely divorcee and researcher for the Chicago Tribune, comes to his North Carolina village to find him, knowing that Garret is the author of the message she found inside a bottle on a Cape Cod beach. And she knows the message spoke to her in a way that profoundly touched her heart. Directed by Luis Mandoki (When a Man Loves a Woman), the film co-stars Paul Newman as Garret’s father.

I was really impressed that each of these films also come stocked with their own special features. Usually collection releases come bare bones. “Safe Haven” has the following special features included: Deleted scenes and an Alternate ending. “The Lucky Ones” comes with the following Special Features: Zac Efron Becomes a Marine, Watch the Sparks Fly — The Romantic World of ‘The Lucky One’, Zac and Taylor’s Amazing Chemistry and Zac and Zeus. “Dear John” comes with the following Special Features: Deleted & alternate scenes, Alternate ending, Outtakes, A Conversation with Channing, Amanda and Lasse Hallstrom, Transforming Charleston featurette, Military in Movies: ‘Dear John’s’ Military Advisors featurette, Mr. Tyree, The Mule and Benny Dietz featurette” and “The Story of Braeden Reed.

“A Walk to Remember” comes with the following Special Feature: Audio commentary by director Adam Shankman, Mandy Moore and Shane West, Audio commentary by author Nicholas Sparks and screenwriter Karen Janszen and Cry — Mandy Moore music video. Lastly “Message in a Bottle” comes with the following Special Features: Audio commentary by director Luis Mandoki and producer Denise Di Novi, Deleted scenes with optional commentary and Five hidden special effects scenes. Like I said again and I will repeat this…this is a must have for any fan of Nicholas Sparks! I just wish it was a Blu-ray collection personally.