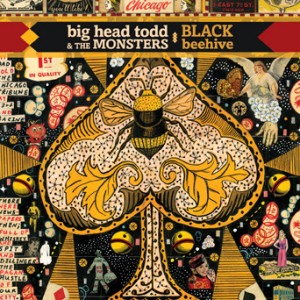 With 25 years in the music business under their belts the members of Big Head Todd and the Monsters have no plans of slowing down. The group’s newest album titled “Black Beehive” hits the shelves a quarter century after the group’s 1989 debut album “Another Mayberry”. Featuring 11 brand new tracks produced by Grammy Award-winning multi-instrumentalist Steve Jordan (John Mayer, Keith Richards) “Black Beehive” see the band strengthening their roots while moving forward at the same time.

Filled with classic blues based instrumentation that blends several other genres such as country, rock and folk music “Black Beehive” is a melting pot of styles and sounds which will appeal to a variety of listeners both young and old. From the down home thump of “Hey Delila” to the dark and gritty rumblings of “We Won’t Go Back” the band covers a lot of musical territory while remaining true to their signature sound. The album features several guest performers including guitarist Ronnie Baker Brooks, Long time Howlin’ Wolf band member Eddie Shaw on Saxophone and harmonica along with producer Steve Jordan who all add the proverbial icing on the cake making the almost 3 year gap between this album and the bands previous release “100 Years of Robert Johnson” worth the wait as both acoustic and electric instrumentation coupled with Todd Mohr’s stylistic vocals make this a must have for any BHT fan.